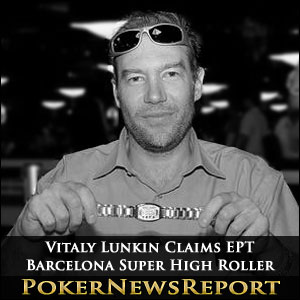 There was an exciting conclusion to the €50,000 buy-in EPT Barcelona Super High Rollers event, as Vitaly Lunkin and Erik Seidel saw off the youngsters to battle out the heads-up for the €771,300 ($1,019,810) Super High Rollers prize and the first trophy of EPT Season 10.

Prior to their heads-up encounter, a fascinating day of action had seen some terrific poker action and some terrible hard luck stories as well – indeed the story of the day was that Erik Seidel actually made it to the final table after almost being crippled in one of the first hands of the day.

Setting the Scene for the EPT Super High Rollers

Eight players remained in the EPT Barcelona Super High Rollers event when the cards were in the air a little later than advertised because of a late finish the night before. Only seven were going to cash in the tournament, and the player most at risk was 2012 WSOP bracelet winner Timothy Adams.

With blinds of 30,000/60,000 (ante 10,000) when play resumed at the Hotel Arts in Barcelona, the five players at the foot of the leaderboard had to pick their spots carefully; but there was no thought required by David Benefield when he was dealt A♠ A♥ in one of the first hands of the day and Ole Schemion raised immediately in front of him with A♣ K♣. Benefield´s Aces held – allowing him to chip up to over 2 million chips, while Schemion relinquished his lead in the tournament.

Unfortunately for Timothy Adams (K♠ 9♠), he picked the wrong spot to shove his last chips into Erik Seidel´s Q♥ Q♣, for although he was ahead after the flop of 2♣ 4♦ K♣, Seidel hit a runner-runner flush to bust the Canadian out in eighth – and out of the money! Fabian Quoss´ timing was also out, and before the end of the level he too was bust from the tournament – shoving his K♠ Q♠ into Mike McDonald´s A♣ K♣.

Schemion and Benefield Both Hit the Rail

Ole Schemion´s demise from overnight chip leader to spectator happened within the space of one level (Level 20 – blinds 40,000/80,000 ante 10,000). Twice he saw his chip stacked reduced by Mike McDonald´s post-flop aggression (giving McDonald the chip lead) and eventually his patience failed him and he shoved his last million chips with 4♦ 4♥ into the Aces of Steve O´Dwyer. Again the Aces held and Schemion was out of the contest in sixth.

David Benefield had chipped up again at the expense of Erik Siedel in a Straight > Straight confrontation at the end of Level 19, but his participation in the tournament was to be ended by Vitaly Lunkin when the two got into a pre-flop raising war with Mike McDonald. McDonald bowed out of the hand when Benefield (A♦ 6♦) shoved the last of his chips in and Lunkin (A♠ 10♦) shoved over the top, and after both players had missed the community cards, Benefield was eliminated in fifth.

As the game went four-handed, Erik Seidel was again the short-stack. Three unanswered shoves allowed him to get closer to his opponents, until an attempted bluff against Vitaly Lunkin back-fired and he was knocked back down to the bottom of the chip counts. Lunkin´s chip stack was going in the other direction and, after picking up a million chips from Seidel´s failed bluff, hit Quad Sixes to eliminate Mike McDonald (K♦ Q♦ – flopped trip Queens) in fourth.

Lunkin Comes from Behind to Take Heads-Up

Going into the finale of the EPT Barcelona Super High Rollers, Erik Seidel had a 7.73 -v- 5.02 million chip advantage, and that was soon extended when Seidel (K♣ Q♠) flopped a pair of Kings to best Lunkin´s J♥ J♣. Seidel almost had the tournament wrapped up in the next hand, but Lunkin (A♥ 7♠) flopped an Ace to double up against Seidel´s Q♥ Q♦ and then himself took the chip lead when his A♥ 5♦ held on against Seidel´s K♥ J♣.

Reduced to 2 million chips, Erik Seidel fought back, and took the chip lead once again at the start of Level 24 (blinds 100,000/200,000 – ante 30,000) when, after forcing Vitaly Lunkin out of a massive pot with a paired Ten, doubled-up with a Full House (Aces > Nines) against Lunkin´s missed Broadway draw. However, Seidel´s impatience to wrap the tournament up proved to be his downfall.

In the first of two disastrous hands for Seidel, Vitaly Lunkin (K♣ K♠) opened up for 400,000 and Erik Seidel (6♦ 6♠) responded by announcing he was all-in. The board provided no surprises and Seidel was back on the ropes. This time there was to be no recovery as, in the next hand, Seidel shoved with K♦ Q♣ and was snap-called by Lunkin – who had been dealt A♣ 5♥. The flop of 6♠ A♠ 6♣ virtually sealed the tournament for the Russian, and his victory was confirmed when the Turn (8♣) and River (4♠) both blanked for Seidel.