The young Swede is no longer this year’s biggest online winner. 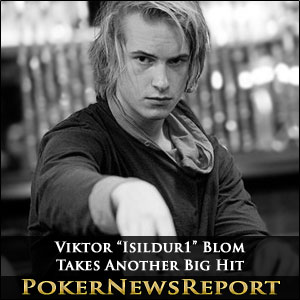 The young Swede is no longer this year’s biggest online winner.

Still, things could be worse. Blom was up over $5.2 million for the year at one point, and overall is having a very lucrative year. However, he is no longer online poker’s biggest winner. That distinction now belongs to Kyle “cottonseed1” Hendon – who ironically, is not part of the Hendon Mob. Hendon is now up over $3.5 million for the year, while poor Blom is only up a bit over $3 million.

Shockingly, Blom was not this week’s biggest loser. Isaac “luvtheWNBA” Haxton was granted that dubious honor by losing nearly 800 grand. But unlike Blom, Haxton managed to spew that amount in a mere 1522 hands. For all you math wizards out there, that’s an average loss of nearly $521 per hand.

One might wonder how a player can lose over three-quarters of a million dollars in just a week. Well, first off, Haxton frequents the highest NLHE games available – typically $400/$800. Secondly he gets involved in hands like this:

Haxton called a raise of $2k with 9♣9♥ from the small blind. The big blind three-bet to $12k and the original raiser folded. Haxton made the call. The flop brought 3♣6♠10♣. Haxton checked, his opponent c-bet for over $17.7k and Haxton raised to $39.6k. His opponent, “Trueteller” jammed and Haxton called off another $75k plus. Issac was crushed by Trueteller’s J♥J♣ and despite running it twice would end up losing a monster pot. And who says online pros get it in light?

Last’s week biggest winner boasted a gain nearly as impressive as Haxton’s loss. A player who goes by the name of “Rhje” won $982,680 in only 2,852 hands. The next biggest winner fell short of Rhje by over $450k. Also of note, high-stakes frequenter Daniel “jungleman12” Cates finished up $381k over 28 sessions.

After skipping the entire WSOP because competing for mere hundreds of thousands wouldn’t be worth his time, Blom has spent the entire summer playing in some of the biggest online cash games in the world, and has shown no signs of slowing down. But if he keeps taking hits like he has over the last couple of weeks, we may see young Mr. Blom begging for a tournament stake.