Sweden’s Viktor ‘Isildur1’ Blom extended his overnight lead in his latest PokerStars SuperStar Showdown with Isaac ‘philivey2694’ Haxton to now have $281,365 of the American’s original $500,000 bankroll. 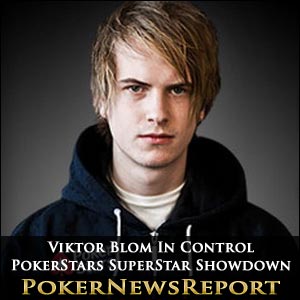 Sweden’s Viktor ‘Isildur1’ Blom extended his overnight lead in his latest PokerStars SuperStar Showdown with Isaac ‘philivey2694’ Haxton to now have $281,365 of the American’s original $500,000 bankroll.

Saturday’s first four-hour session of the $1 million clash – which features blinds at $200 and $400 for the No-Limit Hold’em match-up – saw the Scandinavian high stakes online poker specialist collect $198,438 of New Yorker Haxton’s stack – and Blom continued with his dominance yesterday to up that by another $82,927.

Incredibly, within the first 60 minutes of day two, Team PokerStars Pro Blom had zoomed up to $331,294 in profit to leave Haxton with just over one buy-in for each of the tables they were playing.

But all that changed in the second 60 minutes as Haxton won a huge coin-flip, before taking down another massive pot to cut Blom’s advantage to $116,850. The American eventually chopped that lead down even further to just $39,856 by hand 3,000 during the third hour of play yesterday.

However, Haxton’s fightback stalled during the last hour as Blom won a succession of coolers with a full house and two sets to once again hold a huge lead on $383,000.

While it appeared Blom would come close to snatching the remainder of Haxton’s bankroll before the hour was up, the Swede ended Day 2 under $300,000 in profit after losing another massive coin-flip, as well as several smaller pots, as 1,733 hands were completed.

The rivals will resume their third match-up – with Haxton 2-0 ahead – today at 18:00 BST (British Summer Time).

All you online railbirds out there, don’t forget that you can watch the action unfold over another four hours today by logging in to PokerStars and using their ‘search for a Team PokerStars Pro’ option to find ‘Isildur1’.

Sahamies – who was a Team Europe member when they defeated the USA in the Caesars Cup back in the 2009 World Series of Poker Europe (WSOPE) in London – pocketed $230,000 from his time at the Omaha high stakes tables with ‘RaiseOnce’, who is rumoured to be none other than Phil Ivey, losing more than $200,000.

The other significantly big loser was German’s ‘doncarignano’, who ended the day down by $239,000.

Miller ended the day as the biggest winner from his match-up after recording a $65,000 profit, although he only managed to leave $12,500 in profit after losing out in other big games.

If you missed it last week, PokerStars’ first MicroMillions festival came to a conclusion with the Czech Republic’s ‘Zabaleta1’ pocketing a huge $140,000 after a three-way deal in the $22 buy-in main event.

Polish Team PokerStars Pro Marcin ‘Goral’ Horecki was named as the MicroMillions Player of the Series after he cashed in 33 of the 89 events he played, to just beat out the challenge of Spain’s ‘GMalex89’ by 10 points.

Horecki received a special trophy and a 2013 PokerStars Caribbean Adventure (PCA) package, while the other players to make up the top 10 were handed Spring Championship of Online Poker (SCOOP) main event (medium) tickets with $1,050.

Places 11 to 100 on the leaderboard were also given SCOOP main event (low) tickets worth $109.