Viktor ‘Isildur1’ Blom marked his World Series of Poker debut with more of a whimper than a bang as he crashed out of event #12 in Las Vegas. 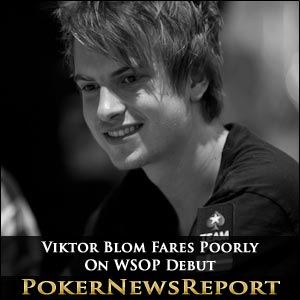 Swedish online star Viktor ‘Isildur1’ Blom marked his World Series of Poker debut with more of a whimper than a bang as he crashed out of event #12 in Las Vegas.

The 21-year-old – making his first ever live tournament appearance in the USA – beat Vegas’ former Full Tilt Poker Pro Andy Bloch in the first round of the $10,000 buy-in Heads-Up No-Limit Hold’em event in the Brasilia Room of the Rio All-Suite Hotel & Casino, but then crashed out to San Jose’s Tommy Chen after arriving a little late for the second-round clash.

Many commentators and fans have questioned the Scandinavian’s ability as a live poker tournament player, but – even if he didn’t fare well yesterday – the Team PokerStars Pro has already proved that he can mix it with the best of them with victory on Paradise Island back in January.

Blom secured $1,254,400 for taking down the $100,000 buy-in Super High Roller at this year’s PokerStars Caribbean Adventure (PCA) – and also continued his online fascination by scoring a double victory in the recent PokerStars Spring Championship of Online Poker (SCOOP).

However, he at least made it into round two, unlike Vanessa Rousso, Jason Koon, Sam Trickett and Matt Marafioti as the 152-player starting field was cut down to 32 during three rounds of play during Day 1 of the competition.

A total of 104 players received byes into round two – meaning 48 had to play off over 24 ties – with the likes of Blom, David ‘Doc’ Sands, Chris Moorman, Matt Perrins and Jason Mercier winning their opening match-ups.

Yevgeniy Timoshenko Out in Round Two

But the real action got going in round two as the 128 players were reduced two 64, with Sands, Daniel Negreanu, Justin Bonomo and Phil Ivey staying alive while pros such as Yevgeniy Timoshenko, Erik Seidel, Victor Ramdin and Leo Wolpert – who picked up $625,682 for winning the 2009 $10,000 buy-in Heads-Up Championship – as well as Vladimir Shchemelev, Faraz Jaka, Shaun Deeb and Andy Frankenberger, busted out.

The immediate goal for the third-round starters was to make the money with a victory. Vermont’s Steve Landfish did just that when beating Canada’s Peter Jetten by rivering a straight to overcome a turned set to become the first player to make round four.

Pakistani Ayaz Mahmood, the 2010 Heads-Up winner, and last year’s winner Jake Cody, of England, also crashed out in the round of 64, while Canadian superstar Negreanu couldn’t overcome heads-up expert Jonathan Jaffe, of Massachusetts.

Team PokerStars Pro Negreanu lost a huge pot midway through the tie when he and Jaffe made a full house – and the four-time WSOP bracelet winner never really recovered before finally exiting when his fives failed to overcome aces.

However, probably the biggest upset of the day arrived when Ivey lost out to unknown Californian player Chae An in round three. The eight-time WSOP bracelet winner got all is chips in with ace-king against An’s ace-seven. However, a seven on the flop sent the superstar to the rail to extend his miserable run at this 43rd annual WSOP.

Other well-known players who did make it into the fourth round are Vanessa Selbst, Eric Froehlich, Brock Parker and Brian Hastings – and they will al be back later today when play will continue until only four players remain.

Michigan’s Charles Tonne will start the third and final day of the $1,500 buy-in Pot-Limit Omaha event #11 in pole position after bagging up with 1,021,000 chips as the only player to have broken through the one million barrier on Day 2.

However, Dutch online high-stakes cash game expert Vincent Van Der Fluit is not too far back in second place with 951,000, although there is then a big gap to third placed Frenchman Damien Lhommueau, who holds 663,000.

A total of 117 players began the second day in the Amazon Room of the Rio, but that was cut back to the nine-handed final table that will see all survivors chasing down the gold bracelet and $265,221 that comes with being crowned champion by outlasting an original field of 970.

Tonne certainly had his fair share of luck on Day 1 to begin the second day as chip leader – but he didn’t ease off as over 40 players exited before level three had started to ensure that he is best-placed to win the event, although 2011 WCOOP event winner Van Der Fluit, of Utrecht, will be a danger.

Tristan Wade is another player Tonne will have to beware as the seventh placed Florida pro can certainly make a move, even with just 150,000 chips to start the final table.

Wade took down the WSOP Europe €3,000 buy-in No-Limit Hold’em Shootout in Cannes last year for $243,191 while amassing almost $1 million in tournament earnings. In fact, with $978,316 from cashes, Wade just needs to finish in eighth for $24,186 to break through than landmark barrier.

Chicago’s Susie Zhao exited in 15th for $11,995 as the highest placed woman in the event. It was disappointing for her, particularly as she had come close to the chip lead on several occasions on Day 2 before meeting her end during level 18 after running into the full house of Mississippi’s Galen Kester.

California Trio On Top After Day 1 of Event #13

However, the first target, as always, will be to make the money, with 81st the lowest paid finisher for $2,453. But the likes of Matt Hawrilenko, Andy Bloch, Dwyte Pilgrim, Shaun Deeb, Daniel Negreanu and Phil Ivey won’t be among those paid after exiting on Day 1.

The players seemed a bit too relaxed on Day 1, with lots of loose play and alcohol being liberally consumed, although that will surely not happen again today as the money bubble approaches.