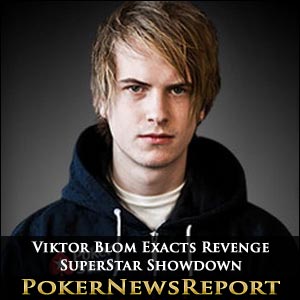 Having found himself 2-0 – but only $46,794 – down to the Malta-based States star, Viktor Blom secured a huge turnaround by winning the latest $1 million clash to move into a profit of $453,206 from the three battles with his rival.

This encounter was significantly different from the previous two, however, as the high hollers had played a fixed 2,500 hands with $150,000 bankrolls then, with the winner simply being the player with the most cash at the end of each game.

This time it took almost three days of four-hour sessions for Blom to emerge victorious from the $200/$400 blind No-Limit Hold’em match-up over four tables, but the Team PokerStars Pro was delighted to have financially taken the lead in the series.

The 21-year-old spoke to the PokerStars blog following the conclusion of his heads-up battle that earned him about $41,667 an hour, saying: “It feels good. It was a tough game.”

However, while the Swede believes “Haxton played good, as usual”, he also felt his American opponent had “maybe played a bit too passive” – therefore giving him the momentum to take all his cash.

Having secured a lead of $198,438 after Saturday’s first day, Blom then increased that to $281,365 following the close of play on Sunday, before making a fantastic start yesterday to add another $40,000 from the first hand.

In fact, during the first hour’s play, Blom had amassed a lead of $370,720 – and continued to dominate, first cracking the aces of Haxton before then turning a set that had also given Haxton two pair.

However, the New Yorker’s comeback failed to flourish as Haxton’s hoped-for inside straight draw never arrived to crack the Swede’s aces, while the former’s A♣ Q♥ could not win the coin-flip against the pocket fours of Blom.

Then, as hand number 5,030 was completed just before the end of day three, it was all over for Haxton as his king-eight was crushed by the trip aces of Blom.

Will there be a fourth SuperStar Showdown between the rivals? It seems certain, but maybe Blom will have other opponents lined up before their conflict resumes. Either way, Poker News Report will bring you the latest news on any future match-ups.