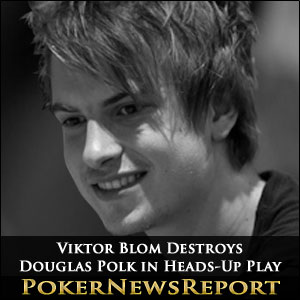 Fresh off the heels of his challenge match victory over Ben “Sauce1234” Suksky, Douglas Polk – known to the online world as “WCGRider”  – ran into the one opponent who seemingly has his number; Sweden’s own Viktor “Isildur1” Blom.

Playing at stakes a bit higher than usual, Polk engaged the most fearless player in online poker in a multi-table heads-up $400/$800 NLHE match that would last seven hours and thousands of hands. Even more astounding, Blom’s confrontation with Polk came after he played a staggering 17 straight hours, some of them in an earlier session against Polk.

In that session, Polk was up over $450k. “Isildur1” would soon recover, winning nearly $300k at 2-7 Triple Draw from the likes of Gus “How do I still have money” Hansen, “Kagome Kagome” and “regen70”. He then proceeded to win another $260k plus from Sanlker playing NLHE.

At this point, Blom was up a meager 80k on the day – significant to most grinders, but a paltry amount to the fearsome Swede. Shortly thereafter, he reengaged in virtual combat with Polk. The young American would take an early $250k lead as Blom was victimized by a massive cooler. After flopping top set of 10s on a 10♣5♣2♣ board in a hand that was 4-bet by Polk pre-flop, Blom check-jammed the flop. Unfortunately for him, Polk held the absolute nuts – A♣K♣. The man who for the longest time was only known as Isildur lost $245k in that hand alone.

From there, things would turn decidedly In Blom’s favor. He would get a bit lucky along the way, winning a classic race holding A♠K♥ to Polk’s Q♥Q♦, but for the most part Blom relied on his overwhelming aggression to steal pots, and get paid off when he had the goods.

At one point Blom was up over $1.5 million for the session, but by the time the pair called it quits he had dumped back $300k. Thanks to the $1.3 million win on the day, Blom regained his status as the biggest online cash game winner of 2013. Over the course of the past four weeks he’s up a whopping $5 million.

It looks like for as good as young Douglas Polk is, he might have to make an adjustment or two before stepping into the virtual ring again with the man who knows no fear.