Swedish star Viktor ‘Isildur1’ Blom hit a one-outer to top the leaderboard after Day 3 of the $50,000 buy-in Poker Players Championship at the World Series of Poker. 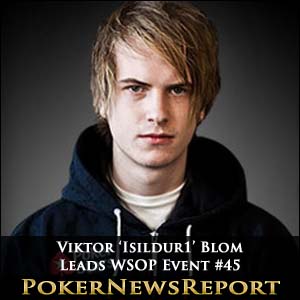 Swedish star Viktor ‘Isildur1’ Blom hit a one-outer to top the leaderboard after Day 3 of the $50,000 buy-in Poker Players Championship at the World Series of Poker.

The 21-year-old online sensation bagged up with 1,262,000 chips to top the event #45 standings in Las Vegas, just ahead of California’s David Oppenheim (1,165,000), after notching a late and dramatic double-up against the extremely unlucky Joe Cassidy.

Day 3 saw five more levels played out as Blom moved into pole position from the 26 survivors to collect the $1,451,527 top prize, gold bracelet and David ‘Chip’ Reese Trophy from this eight-game format tournament at the Rio All-Suite Hotel & Casino.

But the London-based Swede needed a massive slice of luck just to remain in contention, never mind in the actual event! Blom could be accused of robbing Vegas-based Cassidy of a huge pot – more than one million – with his one-outer during a Pot-Limit Omaha hand

Blom was left with just one card to save his tournament life – and that 9♣ duly arrived on the river to give him quads. The excited Swede leapt from his chair while a deflated Cassidy also exploded out of his seat as Gothenburg’s Blom moved up to 1,210,000 in chips while crushing his opponent’s stack to just 50,000.

A stunned Cassidy – with his hands clamped on his head – could only repeat: Oh my God! Oh my God! as he tried to take it what had just happened, while a thrilled Blom walked to the next table to reach between David Oppenheim and Phil Hellmuth to give Luke Schwartz a heartfelt high five.

Blom exclaimed: One-outer, baby! as Londoner Schwartz allowed a smile to cross his face while congratulating the new chip leader.

Cassidy – who was pacing around the table – did, however, manage to battle back somewhat, even though it was late in the day, to bag up in 24th place on 141,000 chips.

Mizrachi Brothers Back For More

No Back-To-Back Wins for Brian Rast

Just 16 places will be paid – earning a minimum of $91,549 – so expect some early fireworks today as the money bubble looms large.