Viktor ‘Isildur1’ Blom has kicked off the PokerStars Spring Championship of Online Poker – securing more than $400,000 from two victories in the opening 2 days. 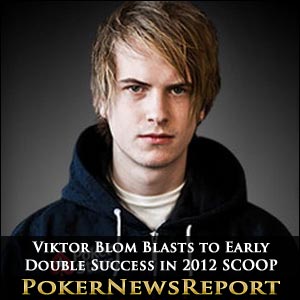 Swedish online star Viktor ‘Isildur1’ Blom has kicked off this year’s PokerStars Spring Championship of Online Poker (SCOOP) in some style – already securing more than $400,000 from two victories in the opening two days.

The 21-year-old started the year impressively by winning the PokerStars Caribbean Adventure (PCA) $100,000 buy-in No-Limit Hold’em Super High Roller for $1,254,400 on Paradise Island, before following that success up with three more live tournament final table appearances on the European Poker Tour (EPT) in Deauville, Berlin and Monte Carlo for an additional $94,342.

However, the Swede is best know for his internet achievements – including his amazing success in the PokerStars SuperStars Showdown against some of the world’s best cash game poker players – and highlighted his skills when triumphing in the $215 buy-in No-Limit Hold’em event #2 (medium) on Sunday during the opening day of SCOOP for $247,200.

An incredible 8,240 players signed up for that event, but it was Blom who took the biggest share of the $1,648,000 prize pool – which easily surpassed the $1 million guaranteed by the poker room – when lifting his first major online crown by defeating Canadian ‘RaisingRay91’ in their heads-up battle. The runner-up also pocketed an impressive sum, $181,889.76, from this opening-day tournament.

Incredibly, those successes have already bagged Blom $407,200 from just two days’ work, so there is every likelihood the UK-based Swede will add even more to his ever-growing bankroll over the course of the 15-day SCOOP.

However, Blom is not the only big-name pro to have already made their mark on this online festival of poker, with Brazil’s Alexandre ‘Allingomes’ Gomes picking up $282,240 for winning the $2,100 buy-in No-Limit Hold’em Six-Max event #1 (high) on Sunday evening after beating out the competition from 783 other starters.

Certainly, Gomes had to display amazing stamina to ultimately defeat ‘arturitooo’ in their heads-up battle that left the Spaniard with $211,680 as this tournament took just short of 30 hours to be completed!

PokerStars will also be delighted to see their guaranteed prize pools being smashed, with Gomes’ triumph coming in an event that saw players share $1,568,000 – more than double the $750,000 the poker room had assured.

Now, as you might recall, French Triple Crown winner Bertrand ‘ElkY’ Grospellier stated that he would be playing event single event of this year’s SCOOP. However, he has so far failed to make any great impression, although there are still 32 tournaments still to be played, so he might well gain that second SCOOP title he so obviously craves.

We at Poker News Report (PNR) will, of course, keep you updated on how SCOOP pans out over the next few weeks.