Viktor ‘Isildur1’ Blom is Back with a Bang

Online poker star Viktor ‘Isildur1’ Blom has emerged from what appears to have been a self-imposed 3 month exile from the game to add about $620,000 to his bank balance. 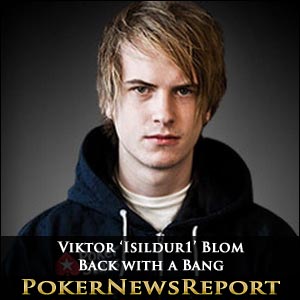 Swedish online poker star Viktor ‘Isildur1’ Blom has emerged from what appears to have been a self-imposed three-month exile from the game to add about $620,000 to his bank balance.

Numerous rumors had surrounded Blom’s disappearance from PokerStars back in September, with many commentators suggesting the 21-year-old might well have come to some sort of disagreement with the poker room giants or that he had even moved to another poker website.

There was also speculation that Blom had decided to share an account with a fellow Swede, so resulting in the elusive pro becoming somewhat anonymous again.

However, with the high stakes play at PokerStars hotting up as Christmas approaches, Team PokerStars Pro Viktor Blom – whose online identity was revealed by PokerStars on January 8 this year at the PokerStars Caribbean Adventure (PCA) – finally returned to the virtual tables to enjoy a very profitable session.

Of course, all that tittle-tattle proved way off target as Blom – who made his first appearance online with the now-beleaguered poker room Full Tilt Poker way back in September of 2009 – returned to action, mostly playing at $100/$200 Pot-Limit Omaha tables during an incredibly successful 12-hour stint.

Blom has certainly lost none of his edge during that extended hiatus as he collected the big bucks from taking on the likes of high stakes experts Phil Galfond, Terken89, Jeans89, and FakeLove888 – who is rumored to be Finnish star Patrik Antonius – as well as massive loser VietRussian, who ended the day $241,000 down.

The turn revealed 2♦ to change nothing, only for the Q♦ river to fill Blom’s straight for a massive pot success.