Sergio Vigano went on a final table rampage to wrap up the $1 million guaranteed Event #10 of the Borgata Poker Open and collect the $168,875 first prize. 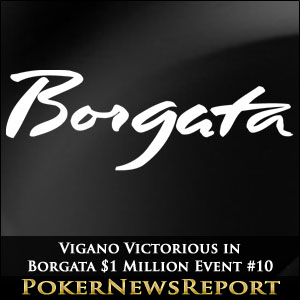 Sergio Vigano went on a final table rampage to wrap up the $1 million guaranteed Event #10 of the Borgata Poker Open and collect the $168,875 first prize.

There was an extraordinary conclusion to Event #10 of the Borgata Poker Open, when Sergio Vigano eliminated six of his final table opponents to stroll away with the first prize in the $1 million guaranteed tournament.

Up until the final day of the event, Vigano had been fairly anonymous, and he had only squeezed into the final table during the penultimate level of Day 3 when eliminating Lyle Diamond in twelfth place (A♦ J♣ > Q♦ J♦) courtesy of a superior kicker.

Coming into the final table with a below average chip stack, nobody expected the player from Marlton in New Jersey – who before this event had lifetime earnings of just $12,000 – to make much of an impact, but how wrong they were!

Play in Event #10 of the Borgata Poker Open resumed in Level 34 (blinds 120K/240K – ante 30K), and the early action saw multiple players take the chip lead at the top of the leaderboard. In just the second hand of the day Jon Bottier got up to 12 million chips when his pocket Sevens were good enough to take down a massive pot against Frank Panetta´s missed open-ended straight draw, but within the first orbit of the button Bottier had relinquished his chip lead to D J MacKinnon after doubling up MacKinnon K♦ K♠ > A♦ Q♥.

Frank Panetta then took the chip lead after a three-way pot in which Panetta´s 7♠ 7♦ flopped a set of Sevens against Esther Taylor´s (J♦ 8♥) missed open-ended straight draw and D J MacKinnon´s (K♥ K♦) overpair. Taylor was bust in tenth place, and MacKinnon´s chip stack slashed to 3.9 million chips. However, Panetta´s chip lead was not to last, and – at the end of Level 35 – Jon Bottier was back on top of the leaderboard after doubling up against Panetta Q♦ Q♠ > K♦ J♦.

At the point when the nine remaining players returned from the first break of the day, Sergio Vigano´s chip stack had hardly moved from what it had been at the start of play. However during Level 36 Vigano doubled up against Dan DiZenzo 9♥ 9♦ > A♣ K♦ and bust D J MacKinnon in ninth place A♣ 8♦ > Q♠ Q♥ to be the first player to breach the 20 million chip barrier.

The heads-up to Event #10 of the Borgata Poker Open was set one level later, after Sergio Vigano had taken the scalps of both Menan Saydam in fourth place A♠ J♠ > K♠ 10♥ and Dan DiZenzo in third place J♣ J♠ > A♣ 6♠. With blinds now at 400K/800K (ante 100K) – and with a 60.5 million -v- 9.1 million chip advantage – it looked almost assured that Sergio Vigano would wrap up the tournament quickly, but that was not to be the case.

Despite such a big chip advantage, it took Sergio Vigano almost an hour to wrap up victory against his more experienced opponent. Dave Fox doubled up almost immediately A♥ 8♣ > K♠ 9♣, and then chiselled away at Vigano´s chip stack to reduce the deficit to 45.4 million chips -v- 24.2 million chips.

The concluding hand of the tournament came right at the start of Level 40 (blinds now 500K/1,000K – ante 100K). Dave Fox made it 2 million chips to play and Sergio Vigano made the call. Fox was again the aggressor after the flop of Q♥ J♥ 10♦, and Vigano flat-called his bet of 2.5 million chips.

Both players checked the 8♦ on the Turn but, after the 4♦ on the River, Sergio Vigano announced he was all-in. Dave Fox made the call for his last 12 million chips, and turned over K♠ Q♣ for top pair. However, Sergio Vigano had 9♣ 7♣ for a Queen-high straight – a hand which was good enough for Vigano to win the $1 million guaranteed Event #10 at the Borgata Poker Open.