Dutch poker player Ruben Visser overcame one of the most formidable final tables in EPT history to win the EPT London Main Event at the Vic this past weekend. 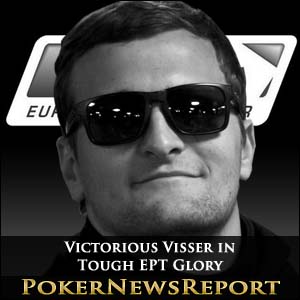 Dutch poker player Ruben Visser overcame one of the most formidable final tables in EPT history to win the EPT London Main Event at the Vic this past weekend.

Visser – who himself is no stranger to major tournament final tables – started the concluding day of the EPT London Main Event second in chips and seated one place to the left of last year´s runner-up Steve O´Dwyer – with Chris Moorman and PokerStars pro Theo Jorgensen also having position on him.

Only a few minutes remained in Level 26 (blinds 20,000/40,000 – ante 5,000) when play started and Ruben Visser was immediately involved in the action – losing the first hand of the day to go to showdown against Lithuanian player Mantas Visockis (Q♥ 8♥ > 10♣ 8♦) before taking chips from both Theo Jorgensen and Steve O´Dwyer.

Jorgensen got his chips back with interest when eliminating Chris Moorman in eighth place (A♥ K♠ > 7♦ 7♠), but it was Olof Haglund who made the most sensational start to the day – taking the chip lead when doubling up through Steve O´Dwyer (Q♦ Q♠ > A♥ K♠) and then sending Tamer Kamel to the rail in seventh (K♣ Q♣ > A♣ 10♥) and taking a substantial chip lead.

Visser Climbs as Frank and O´Dwyer are Eliminated

Christopher Frank had chipped up to over 3 million chips – mostly courtesy of an outrageous bluff against Theo Jorgensen towards the end of Level 27 – but the eighteen-year-old´s excellent run in the EPT London Main Event came to a dramatic end as he called Ruben Visser´s (9♥ 9♣) pre-flop shove with A♥ K♠ and watched as the board ran 10♣ high.

Steve O´Dwyer – who had been exceedingly quiet since doubling up Olof Haglund – was to be eliminated in fifth position after seeing his A♣ 2♠ crushed by Theo Jorgensen´s A♦ A♠ and, going into four-handed play in Level 28 (blinds 30,000/60,000 – ante 10,000), all of the players were well-stacked with a minimum of 50 big blinds in front of them.

Jorgensen´s Roller-Coaster Comes off the Rails

Following the elimination of Steve O´Dwyer, Theo Jorgensen experienced a number of highs and lows before his challenge for the EPT London was derailed. First he lost more than 2 million chips to Olof Haglund when his A♥ Q♥ was crushed by Haglund´s K♥ K♠, but was able to double up against Mantas Visockis when his pre-flop shove with K♣ J♣ was rewarded with Quad Jacks.

Jorgensen´s departure came in the cruellest of circumstances. Having called Ruben Visser´s A♠ 8♥ shove with pocket Fours, Jorgensen was in the lead all the way until the river, when the A♣ was dealt on the river to end the Dane´s tournament and elevate Ruben Visser back into the chip lead. At this point the three remaining players worked out a deal that would see each of them rewarded for the chips they had in front of them and left £140,000 to play for.

Visser Extends his Lead into Heads-Up

Ruben Visser used his big stack and some aggressive play to take control of 50 percent of the chips at the table – often shoving all-in pre-flop to steal the 40,000/80,000 blinds and rivering an Ace High flush to best Mantas Visockis flopped Jack high flush. However, it was Olof Haglund who was the next player to depart in third.

Haglund (K♥ J♦) had three-bet up to 515,000 chips and, as was becoming customary, Ruben Visser (A♠ 8♦) moved all-in. Haglund made the call and watched in horror as the first card dealt on the flop was the A♦. With no help on the board to enable a comeback, Haglund was eliminated in third and Visser took a 15.595 million -v- 3.735 million chip advantage into the heads-up.

Visockis Fights Back but Visser is Victorious

Despite his massive chip advantage, Ruben Visser was unable to wrap up the EPT London Main Event as quickly as he would have liked and his frustration started to show – mucking his hand with some irritation when Mantas Visockis (A♥ 8♥) took a 2 million chip pot with two pairs and seeing his own two pairs (Q♥ 6♥) crushed when Visockis (K♠ K♦) caught a runner-runner spade flush.