A star-studded audience attended the London Hippodrome last night to recognise the best of the British poker industry at the British Poker Awards. 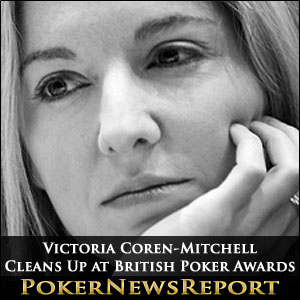 A star-studded audience attended the London Hippodrome last night to recognise the best of the British poker industry at the British Poker Awards.

Last night´s event at the London Hippodrome was the fifth staging of the British Poker Awards and Victoria Coren-Mitchell was undoubtedly the star of the show – collecting three of the awards to add to the three she has won in previous years.

Representatives from the Dusk till Dawn poker club will have excess luggage to take back up to Nottingham after also picking up three awards, and there were dual appearances on the Hippodrome stage for Simon Deadman and Chris Moorman – both of whom won two awards.

Incredibly, this was the fifth successive year that Chris Moorman had won the award for “Best Online Player”, and the first year that Neil Channing won nothing at all. Redtooth Poker and Run it Once enjoyed back-to-back successes after winning their respective categories in 2013, and Jake Cody collected his third British Poker Award – this one for his writing skills rather than his poker skills!

Toby Stone (“Best Tournament Director”) and Dusk till Dawn (“Best Card Room”) made it a hat-trick of wins in their respective categories and Daniel Negreanu was once again voted “International Player of the Year” – again having his award collected by Liv Boeree, who still has Negreanu´s trophy from last year sitting on her mantelpiece at home.

How Did Anti-PokerStars Sentiment Affect the Results?

Inasmuch as each of the winners was fully deserving of their awards, it was significant that representatives of PokerStars did not collect as many as usual. Back in December, we noted that issues such as unpopular changes to the site´s rewards structure and the introduction of a foreign exchange margin might influence public voting – and it appears we were right.

PokerStars was well beaten by Sky Poker in the public voting for “Best Poker Site” and in the categories of “Best Card Room” (for PSLive @ The Hippodrome) and “Best UK Tournament” (for EPT London) by Dusk till Dawn. Patrick “pads1161” Leonard was overlooked for “Best Online Player” despite final tabling every PokerStars Sunday Major, as was PokerStars Pro Alex “Kanu7” Millar – who won both “Best Online Cash Player” and “Player of the Tear” in 2013.

Also during the public voting period, Victoria Coren-Mitchell made a stand against the introduction of a “dangerous” casino product by quitting her relationship with PokerStars. Without wishing to detract from Victoria Coren-Mitchell´s tremendous achievements in 2014, her stand against the machine received a lot of public support and possibly a lot of public votes. She won every award she was nominated for.

Congratulations to all the winners at the British Poker Awards!