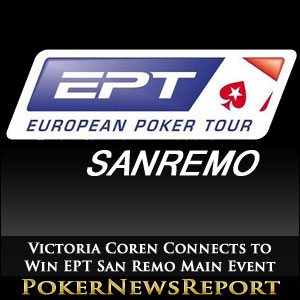 There was a sensational climax to the EPT San Remo Main Event yesterday evening, when Victoria Coren – the first woman ever to win an EPT Main Event – became the first dual winner of the prestigious title, seven and a half years after taking down the EPT London for £500,000.

However, it was not only the fact that Victoria Coren had achieved what no other player had in ten years of the European Poker Tour that was so sensational; it was the manner of her victory – coming from last to first at the final table, and then winning the title by cracking her opponent´s Aces.

Victoria Coren – presenter on the TV show “Only Connect” – had rated her chances of success so small that she left husband David Mitchell at the couple´s hotel and told him she would see him soon; and with blinds of 20,000/40,000 (ante 5,000) when play got underway at the Casino San Remo, she looked to be in deep trouble against the stacks of chip leaders Jordan Westmoreland and Giacomo Fundaro.

Kings Make a Difference to Benelli and Coren

The final table of the EPT San Remo started quietly, with no major dramas during the remainder of Level 27. Giacomo Fundaro was absent from the table at the beginning of Level 28 – believing the players were on a break – and he almost missed the elimination of Emmanuel Pariset by Andrea Benelli in eighth place K♥ K♣ > K♦ Q♣.

Victoria Coren found a few more chips to work with when doubling up against Andreas Goeller K♦ K♣ > 7♣ 7♠, and she laddered up another place on the payout table when Benelli crippled Andrija Martic with a flopped straight (10♠ 9♦ > A♠ K♣) and then sent the Croatian to the rail in seventh place when rivering a Spade flush K♠ J♠ > A♠ J♣.

With the eliminations of Emmanuel Pariset and Andrija Martic, Andrea Benelli had built his stack up to 7.5 million chips; but, as play went six-handed, Jordan Westmoreland became more active and eliminated Bruno Stefanelli in sixth place J♥ J♣ > A♠ J♦ before hitting Quad Threes to take a chunk of chips from Giacomo Fundaro.

Westmoreland´s rise towards the top of the chip counts continued when his pocket Threes held against Andrea Benelli´s A♠ 6♦, and the final table of the EPT San Remo became four-handed when Jordan Westmoreland (A♥ 3♥) made a huge call against Andreas Goeller (10♦ 5♦) after the flop of J♥ 3♠ 5♥, and hit Trip Threes on the Turn to send Goeller to the rail in fifth.

Westmoreland Hits the Cards to Hit the Lead

Jordan Westmoreland´s ascent to the top of the leaderboard was completed when he flopped a flush with Q♥ 6♥ and got three streets of value against Andreas Benelli (A♠ 10♠); but his strong run continued, and he opened up a sizeable gap on the three remaining players when rivering a Jack-high straight against Benelli´s pocket Queens.

Victoria Coren temporarily applied the brakes to Jordan Westmoreland´s runaway lead when doubling up A♥ K♥ > A♦ Q♥, but Westmoreland was soon back on track – forcing Andreas Benelli, Giacomo Fundaro and Victoria Coren out of big pots to take his chip stack to beyond 8 million chips midway through level 29 (blinds 40,000/80,000 – ante 10,000).

Benelli Busts and it Gets Tight at the Top

Andrea Benelli´s chip stack suddenly went into freefall, and he paid out Victoria Coren and Giacomo Fundaro before being eliminated in fourth place by Giacomo Fundaro Q♦ 10♣ > K♥ 10♠ when Fundaro paired his Queen on the flop. Fundaro also rivered trip Eights to close the gap on Jordan Westmoreland, just as Victoria Coren started to increase her activity at the table.

Coren took several big pots from Jordan Westmoreland as Level 30 got underway (blinds now 50,000/100,000 – ante 10,000), and she moved up into second place behind Westmoreland when flopping trip Nines to take 800,000 chips from Giacomo Fundaro. Ten big blinds now separating first and second, with another ten big blinds back to third.

Those final chips went in four hands later with Q♥ 6♥, and Victoria Coren made the call with A♦ 3♠. The 6♣ landed on the Turn to give Jason Westmoreland hope of a double-up, but the A♥ spiked on the river to eliminate the American in third place and give Victoria Coren a 12.08 million -v- 4.6 million chip advantage going into the heads-up against Giacomo Fundaro.

Despite having a minimal rail (husband David Mitchell had now joined the proceedings), Victoria Coren had the support of thousands of people on Twitter – including non-poker players familiar with Coren´s “Only Connect” TV show – who stopped what they were doing to watch the climax of the EPT San Remo Main Event on the live feed.

Guests at UK poker player Jamie Burland´s wedding, players at the Irish Open in Dublin and early arrivals for the EPT Grand Final in Monaco all had their eyes glued to EPT Live to see if Victoria Coren could hold onto her advantage and become the first player to win two EPT titles.

The relative chip stacks changed little in the opening few hands, but thirty minutes into the heads-up this happened:

Fundaro checked again after the 10♠ on the Turn, but Victoria Coren did not slow down and bet a further 1 million chips. Fundaro responded by announcing he was all-in and Coren made the call. Only an Ace or a Seven could prevent Victoria Coren from being the first player to win two EPT titles, and Twitter erupted when the 4♠ blanked on the River to give Victoria Coren a place in poker history and the €476,100 first prize.