Just days before The Big Event began, PokerStars withdrew from sponsoring the event which meant it wasn’t to be an NAPT (North American Poker Tour) event and there was also no television coverage, but… 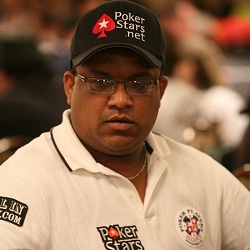 Just days before The Big Event began, PokerStars withdrew from sponsoring the event which meant it wasn’t to be an NAPT (North American Poker Tour) event and there was also no television coverage, but that didn’t stop it from being a great success.

The five-day event took place at the Bicycle Casino in California, had a buy-in of $5,000, and attracted a total of 417 entrants to create a total prize pool of almost $2million, with $500,000 set aside for first place.

It was Victor Ramdin who began the final table as chip leader after being one of the chip leaders for much of the tournament, beginning with just over 2.2million chips. However it was Jeremy Asmus (who finished Day 4 of the event as chip leader) who seemed unstoppable because he held over half the chips in play when the atction was four-handed, and after Taylor von Kriegenbergh was eliminated in 4th place it was looking like Asmus would use his stack to go on and claim victory, however he lost in a coinflip against Joe Hachem and went on to be eliminated by Hachem several hands later.

It was Hachem who entered heads-up play with the chip lead however Ramdin doubled-up after flopping a straight when he held 69 which meant Ramdin was now chip leader. Hachem managed to double up once more however on the final hand of the tournament, Ramdin spiked a Jack after holding AJ as Hachem held AK to give him victory for $500,000 and title of 2011 Big Event Champion.

Victor Ramdin represents PokerStars.com, where he is a Team PokerStars Pro. PokerStars is the worlds largest online poker site with over 200,000 players regularly online and offers great software, the biggest online tournaments (including a weekly $1.5million guaranteed tourney called the ‘Sunday Million’), excellent cash-games and game variety (although they do not offer side games such as Blackjack or Roulette – for Roulette information please visit RouletteStar.com), lots of exciting monthly promotions and lots more!