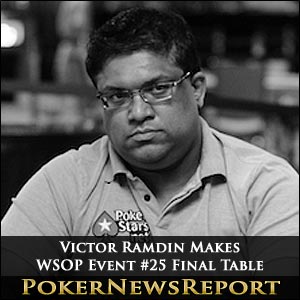 Day 2 started out with 50 survivors from the original 366, but that was cut back by 40 from the five tables as they all chase that gold bracelet on today’s third and final day at the Rio All-Suite Hotel & Casino.

The first pro to win his table was New Jersey’s Brian Meinders, followed soon after by Sean Rice – also from New Jersey – and California’s Matthew Schreiber. Once Schrieber had made it into Day 3, the seven other tables had started heads-up clashes, with Maryland’s Brock Parker the next to qualify as several of the head-to-heads slowed right down.

One table was particularly interesting as Justin Bonomo clashed with fellow Vegas-based player Victor Ramdin, of Team PokerStars Pro. Ramdin began their heads-up clash with the chip lead and, following an exciting battle of ups and downs, he eventually secured the knockout when his ace-four held against Bonomo’s queen-nine.

Houston’s Preston Derden was next to secure his final table spot when defeating California’s Millie Shiu in the Pavilion Room of the Rio, while Christopher Hartman, of Arkansas, soon joined him to leave only three places up for grabs.

You will notice that no two players have the same sized chip stacks. That is because of no-shows on Day 1 and dead stacks, although, with only 11,000 chips covering all 10 players, we should be in for a thrilling final table today.