Notorious for his seemingly reckless antics at high-stakes cash games, Victor Blom proves that he is no fluke by winning PokerStars SCOOP Main Event. 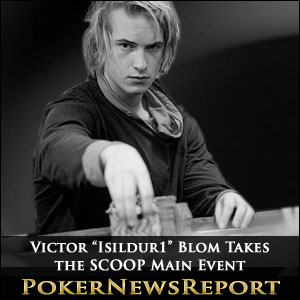 Notorious for his seemingly reckless antics at high-stakes cash games, Victor Blom proves that he is no fluke by winning PokerStars SCOOP Main Event.

Victor Blom, known by most of the online poker world as Isildur1, has proven once and for all that he is a force to be reckoned with. Through his amazing back to back wins in last year’s SCOOP, a seven figure score at the 2012 PCA Super High Roller Event, and now a first place victory in the PokerStars SCOOP Main Event, Blom has become one of the most respected and feared young poker players in the world.

His win at the prestigious $10,300 event was good for $1.1 million dollars, but that pales in comparison to the recognition Blom has earned as a Main Event champion. Although Victor was one of the chip leaders at the final table, his extremely aggressive, erratic style almost proved to be his downfall. But in the end, he was able to recover to defeat Dutch pro Noah “Exclusive” Boeken for the exclusive title.

Luck was on the side of the twenty-three year old Swede, as on the final hand of the match he was the beneficiary of a dream flop. Boeken raised from the button holding K-5 off-suit, with Blom opting to only call with Q-T of clubs. The flop came K-J-9 with two spades, giving Blom the nuts and Boeken top pair. Blom deceptively checked, Boehen bet, Blom raised and Boehen 3-bet shoved for his remaining chips. When the cards were turned over, Boehen realized he needed a miracle to suck-out. The turn was a 9, giving the Dutchman a glimmer of hope, but the river bricked out, and Blom’s victory was secured.

Million dollar paydays are nothing new to the Swede. He became famous for playing in nosebleed stakes cash games on Full Tilt Poker, partaking in ten of the biggest pots ever played online. Hundreds of railbirds would watch the mysterious, hyper-aggressive newcomer with earnest. Back then his identity was a secret, but he has since publicly revealed himself.

Blom is already up three million dollars in online cash games this year, and is well on his way to achieving legendary status within the poker community. He hosts the Holland television program Poker Kings NL alongside Marcel Luske and was a PokerStars Team Pro until February of last year.