There was an exciting conclusion to the Estrellas Poker Tour in Madrid, with four different players holding the chip lead at various stages of the final table. 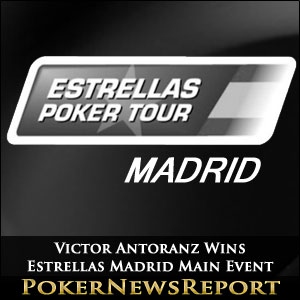 There was an exciting conclusion to the Estrellas Poker Tour in Madrid, with four different players holding the chip lead at various stages of the final table.

After an exceptionally long Day 2 on Saturday, eight players returned to the Gran Casino Madrid yesterday with the aim of following in the footsteps of Adrian Mateos Diaz – the young Spanish player who won the ESPT Madrid Main Event last year prior to winning the World Series of Poker Europe Main Event for €1 million.

The final table was headed by Raijmond Slabbekoorn from Holland, who had built up a substantial chip advantage after the 103-player bubble had burst, and whose notable scalps included Spanish poker legend Raul Mestre – who had moved all-in with pocket Sixes, got called by Slabbekoorn (K♦ J♦) and then saw three diamonds dealt on the flop.

Brown Unlucky to be First Casualty

With blinds at the final table starting at 30,000/60,000, it did not take long for Gabriel Barba to be involved in the action. Barba moved all-in with Q♠ J♠ and was called by Christophe Brown, who had pocket Nines. A Jack in the window paired Barba´s hand, and he and Brown changed positions on the leaderboard.

It was then Brown´s turn to move all-in – but this time he was in a much stronger position, having been dealt pocket Aces. Jesus Alfaro made the call with pocket Fives and the board fell 7♠ 2♠ 8♣ / 6♥ / 4♦ to give Alfaro a runner-runner straight and send Brown to the rail.

Slabbekoorn off the Top, as Two More Players Bust

Raijmond Slabbekoorn became involved in a large number of pots, and lost a significant quantity of chips to Heinz Traut in a pocket Kings > pocket Jacks encounter. Slabbekoorn´s loss enabled Alfaro to climb above him when Alfaro bust Yvan Dubra in seventh place A♥ 10♦ > A♠ 8♠.

Nuno Capucho was also eliminated from the Estrellas Madrid Main Event by an Ace- Eight combination – running his A♥ 8♦ into the pocket Kings of Heinz Traut and failing to find the Ace he needed to stay alive in the competition.

Antoranz Connects to Move in the Right Direction

With blinds increasing quickly, short stacked players were forced into taking chances in situations they would prefer to avoid – sometimes with dividends. Victor Antoranz moved all-in with Ace-Five and caught a Five on the flop to double-up against Gabriel Barba´s pocket Fours.

Barba was then bust in fifth place in the next hand when his J♦ 8♣ failed to find a Jack on the board and came second to Heinz Traut´s A♠ 8♠, and Antoranz improved his position further when Raijmond Slabbekoorn called the Spaniard´s A♣ 5♦ shove with nothing more than 10♦ 5♣ and Antoranz went on to make Trip Aces.

Slabbekoorn Cracks Aces and then Goes on Tilt

A crazy sequence of events then followed, which started with Raijmond Slabbekoorn flopping two pairs (Kings and Sevens) to crack Jesus Alfaro´s Aces and regain the lead in the tournament. Slabbekoorn then started getting involved in pots with the strangest hands – a scenario which led to the tournament director extending the next break to investigate whether Slabbekoorn was chip dumping to Heinz Traut.

However, Traut was not the only player to benefit from Slabbekoorn´s questionable play, as Victor Antoranz twice doubled up against the Dutchman before Jesus Alfaro doubled up 7♦ 7♣ > 9♥ 10♥ and then eliminated Slabbekoorn in fourth place Q♠ 5♠ > 4♥ 9♥.

After the elimination of Raijmond Slabbekoorn, the chip stacks of the three remaining players were fairly similar and an ICM deal was agreed that would leave €15,000 for the winner. Despite being chip leader at the time, Traut saw his stack start to evaporate under pressure from Victor Antoranz who eventually eliminated the German in third place with Ace-King > Ace-Four.

Going into the heads-up Victor Antoranz had a 3:1 chip advantage over Jesus Alfaro, but Alfaro quickly got on terms when a Nine on the flop helped him to secure a double up against Antoranz A♠ 9♦ > A♣ 7♣. Antoranz regained the advantage when his pocket Nines held up against Alfaro´s pocket Fives, and the tournament was quickly concluded thereafter – but in a remarkable hand.

Reduced to five blinds, Jesus Alfaro was prepared to shove with practically anything, and he got the last of his chips in with K♦ 5♦. Victor Antoranz was happy to make the call with 3♣ 3♦, but not so happy with the flop of Ace/Deuce/Five – which paired his opponent´s kicker and put Alfaro ahead in the hand.

Incredibly a Four spiked on the Turn to give Antoranz an Ace-Five straight – and the “wheel” held to make Victor Antoranz the Star of the Estrellas Madrid Main Event.