Vicky Coren came from behind to snatch victory from Melanie Weisner in a dramatic conclusion to the EPT Monte Carlo Heads-Up side event. 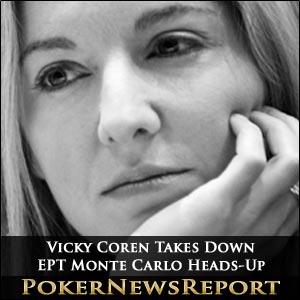 The popular PokerStars-sponsored Vicky Coren came from behind to snatch victory from Lock Poker´s Melanie Weisner in a dramatic conclusion to the EPT Monte Carlo Heads-Up side event.

Vicky, who last tasted EPT success when winning the Main Event at EPT London in 2006, collected €58,900 for her victory, while Melanie – who is yet to taste outright success in an open live event – picked up €39,250 for her second place finish.

Vicky Wins the Hard Way – Over a Bottle of Wine

In the first ever all-female heads-up finale in EPT history, the two ladies shared a bottle of wine and spoke about pregnancies while playing. Vicky took the first leg of the best-of-five final when both players help top pair but Vicky had a better kicker, but she slipped behind when Melanie´s call with K8 found a King on the flop and then when her Jack high flush was bested by Melanie´s Ace high flush.

The wine and the convivial atmosphere did the trick in the end for Vicky, as she rallied to overcome a short stack in the fourth leg to draw level, and then take the deciding leg for a 3-2 victory. It was a dual “Lock-out Knockout” for Vicky, who had beaten Lock Poker´s most recent pro signing – Annette Obrestad – in her second round game on Tuesday. Vicky now hopes her good fortune stays with her through the EPT Monte Carlo Main Event which is the highlight of the European Poker Tour season.

Justin Bonomo shook off his wretched European Poker Tour record (his last cash was in 2005) to win the €100,000 buy-in super high-roller event from Tobias Reinkemeier; the player who won the event two years ago. Entering the heads-up with a 6:1 chip advantage, the American made short work of Reinkemeier to collect the first prize of €4,640,000. 38 players – seven of whom took advantage of a second chance re-load on Day 1 – created a prize pool of €4,432,500, with the top 6 players all cashing.

Finnish pro Jussi Nevanlinna overcame the disappointment of losing his third round heads-up match against Melanie Weisner to storm back to form with victory in the €5,000 buy-in PL Omaha event. In a strong field of 45 which included the 2010 PokerStars Caribbean Adventure winner and current EPT Omaha Player of the Year, Nevanlinna – who also won the 6-Max side event at EPT Madrid last month – maintained his early chip advantage to see off William Thorson in the conclusion of the event to collect the €80,000 first prize.