Vicky Coren-Mitchell won a great deal of respect from the poker community after revealing her motives behind the decision to quit as a PokerStars Team Pro. 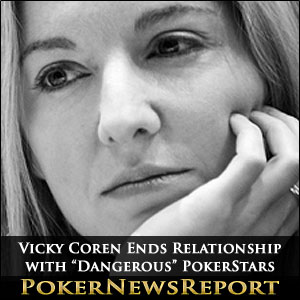 Vicky Coren-Mitchell won a great deal of respect from the poker community after revealing her motives behind the decision to quit as a PokerStars Team Pro.

Last night, one of the most popular PokerStars Team Pros of all time – Vicky Coren-Mitchell – announced that she was terminating her endorsement contract with the world´s largest online poker site, and published a detailed blog revealing her motives behind the decision.

Citing the reason for her departure as the imminent introduction of the PokerStars online casino, Coren-Mitchell wrote she felt she could no longer endorse a site that offered casino games at unfavourable odds which can be “dangerous” to the vulnerable and desperate.

Explaining that poker is a game in which players take each other on with the same basic chance, the dual EPT winner stated that she is not anti-casino, but felt that – by endorsing PokerStars – she could be sending some people to a place which would be dangerous for them.

“Poker is What I Signed Up to Promote”

In “Goodbye Team Pro”, Vicky Coren-Mitchell explained that her decision to quit PokerStars was a “sad and scary” one – having been a sponsored player on the site since 2007 – and an ironic one; as she had intended to spend more time playing online over the next couple of years.

Coren-Mitchell was keen to establish that her decision to terminate her endorsement contract was a personal one and not intended to be any criticism of her former sponsors – who had tried to keep her on the “team” by recognising her objections, and assuring her that she would not be asked to promote the casino side of their operations.

Acknowledging that “business is business” – and that she understood why PokerStars is introducing a product for which there will be a demand – Coren-Mitchell wrote that she signed up to promote poker and could not have her “name still over the shop” when there was the risk of somebody succumbing to the dangers of addiction.

Vicky Coren-Mitchell stated that her resignation from PokerStars Team pro was not the end of her poker-playing career. She stated that PokerStars is still the best site at which to play online poker and that she would still attend various UKIPT and EPT events. She said that there may be a time in the future when she would be able to work with PokerStars again on something that is “pure poker”.

Vicky Coren-Mitchell´s departure from PokerStars sent social media and the poker forums into frenzy. At one point so many players were visiting Coren-Mitchell´s blog post that her site crashed repeatedly and it was eventually re-posted on the 2+2 forum.

The general consensus of opinion was the Vicky Coren-Mitchell had made a brave move based on her own personal feelings, and practically every commentator on her site and the 2+2 thread was appreciative of the contribution she had made to poker over the past seven years and respectful of her decision to quit PokerStars Team Pro.

Among the plaudits Vicky Coren-Mitchell received over Twitter was one from her old “boss” Eric Hollreiser – PokerStars´ Head of Corporate Communications. He tweeted:

We’re sad to see Vicky go and remain thankful for her support of the game and the company and wish her success in poker and in life <3 — Eric Hollreiser (@erichollreiser) November 26, 2014

We echo those sentiments.