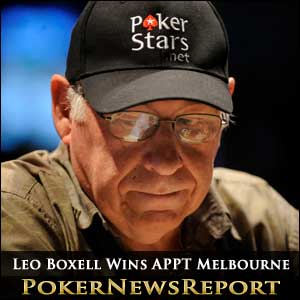 The 69-year-old Leo Boxell, who displayed great patience as he eventually defeated New Zealand’s Phillip Willcocks in heads-up play in the lavish Crown Poker Room, thanked all his supporters, as well as PokerStars, before adding that he “really appreciated” all the backing he received.

Boxell went on to offer his “commiserations to the runner-up”, Willcocks, but pointed out that the Kiwi “played tremendously for four days” and is backing him to secure “more wins…in the future”.

A regular competitor on the Australian poker scene, Boxell has now zoomed to the top of the Australia-New Zealand Player of the Year table, while also moving past the AUD$1 million mark in career earnings.

The unfortunate final-table bubble boy was Australian Aharon Shabtay as he was eliminated in 10th place after almost nine hours’ play.

Melbourne was the first stop on season five of the APPT, with the biggest casino in the Southern Hemisphere welcoming 260 entrants from 18 countries, before moving on to Queenstown in New Zealand and Macau, China.

Jackson Zheng and Eddie Mascardi – who both qualified online through PokerStars – made the final table of an event that boasted a prize pool of AUD$1,222,000, but were eliminated in eighth and seventh respectively.

Team PokerStars Pro Chris Moneymaker – the 2003 World Series of Poker (WSOP) main event winner – was the biggest draw at the event as he began his ‘Moneymaker Poker Tour’, which will see the 35-year-old American play in a series of events across the globe in countries such as Croatia, Scotland and Spain.

Moneymaker – who made time to play in a AUD$10 rebuy event with some locals – made it to Day 2 of the main event, but crashed out without making the money.

Other Team PokerStar Pros to line up included home favourite Joe Hachem, Bryan Huang (Asia), of Singapore, and American Keiran Harris (Team Online), but only Harris made the money with his 24th place finish for AUD$9,800). Hachem crashed out on Day 1 and Huang fell by the wayside on Day 2.

Final placings and payouts from the PokerStars.net APPT Melbourne event: