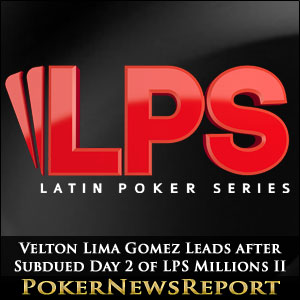 It was a very laid-back second day of the LPS Millions II yesterday due to the unique structure of the event, which saw the blinds rolled back to 500/1,000 (ante 100) at the start of Day 2.

Consequently, players who had narrowly survived the fourteen opening flights with stacks of around 30,000 chips found that they had 30 big blinds – rather than the five or six big blinds they had at the close of their respective Day 1s.

Furthermore, as the 103 players who took their seats yesterday at the Majestic Casino were all assured of a $2,328 min-cash, there was no sweat over who was going to survive the bubble or short stacks delaying play while waiting for other players to bust out.

Going into Day 2 of the LPS Millions II, the chip lead was held by Anthuan Hazkoun – who had sprung to the top of the leaderboard on a crazy Day 1N, which saw previous LSP Millions winner Carter Gill crash out after attempting to qualify for Day 2 on five separate occasions.

Hazkoun survived the five one-hour levels of action despite being sat alongside the man he denied the chip lead to – Carlos Hernandez. With 431 and 334 big blinds respectively, the two players avoided any major confrontations to finish the day in tenth and fifteenth places.

It was not such good news for the player who entered the day in third place – Richard Taraska. Taraska had an appalling day, and crashed out in sixty-eighth place just before the close of play, while fourth placed player – PokerStars Pro Nacho Barbero – managed to add 32,000 chips to his overnight stack to finish Day 2 of the LPS Millions II in twelfth position.

Looking Ahead to Day 3 of the LPS Millions II

With only forty players being eliminated during Day 2 of the LPS Millions, sixty-three players will return to the Majestic Casino to contest Day 3. Play will resume in Level 15 (blinds 1,500/3,000 – ante 400) with most of the field still comfortably stacked.

The plan is to play a further five one-hour levels today and, with the final table not scheduled until Saturday, the pace of the tournament is likely to be subdued once again. The top ten players who are more comfortably stacked than the others are:

Despite the crazy rush of entries and re-entries during Day 1N of the tournament, the $1 million guaranteed event was undersubscribed by $358,750. Consequently the prize money for the LPS Millions II is as follows: