With the WPT main event just won by Pateychuk, yet another Russian, Vedzizhev Beslan, has ended Day 1A as chip leader at the European Poker Tour main event in Prague. 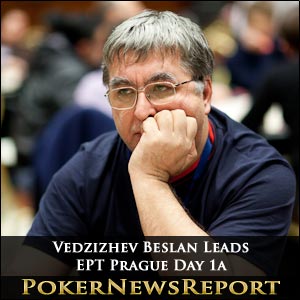 Prague is certainly the place to be right now. With the World Poker Tour (WPT) main event just won by Russia’s Andrey Pateychuk for $630,263, yet another Russian, Vedzizhev Beslan, has ended Day 1A as chip leader at the European Poker Tour main event in the same city.

PokerStars qualifier Vedzizhev Beslan sits on 132,200 chips after the first opening day’s eight levels of the €5,300 PokerStars EPT main event in Prague as the field was cut down by 101 players to 133 survivors.

Spaniard Jesus Cortes, who was runner-up at EPT Barcelona in season seven, is second just 1,000 chips behind Beslan, while a second Russian in Sergey Baburin finished the day just 100 further chips back in third spot.

Three Team PokerStars Pros fell by the wayside, however, as Toni Judet, Richard Toth and Marcin Horecki were sent to the rail earlier than they would have expected.

Strangely, Danish star Gus Hansen arrived at his table with a Bible and banana! He must have been calmed as he read the religious text as the 37-year-old one-time World Series of Poker (WSOP) bracelet winner stayed away from trouble to remain in contention for the top prize.

The above players will, of course, be joined by the Day 1b qualifiers as all entrants chase the top prize, as well as a dazzling bracelet from Shamballa Jewels – the season eight official bracelet sponsor – that is valued at over €10,000.

Irishman O’Dea appeared poised to exit the event early, however, when losing a large pot to Raffaele Gerbi.

With all the chips in the pot following the arrival of the turn card, O’Dea had a straight.

But Gerbi, with two pair, filled up for a flush on the river to chop November Niner O’Dea’s stack. But the Dubliner fought back when doubling through Chris Brammer as his top pair held up a Q♠ 9♣ 2♠ flop.

Brammer, who had K♣ J♣, put O’Dea all-in – and the Irishman showed A♦ Q♦. The turn and river supplied the 9♥ and {7a} to give O’Dea the pot and put him back in contention.

It looked like there would be 233 entries starting with 30,000 chips for the opening flight, but Bryn Kenney – a PokerStars qualifier – was a late arrival after picking up $59,570 for winning a $109 rebuy event at the website.

Kenney didn’t manage to get any sleep until 7am, but was still able to survive as he eyes up Saturday’s final table.

Day 1b will witness the arrival of former main event champions in Jonathan Duhamel and Pius Heinz, while defending Prague champ Roberto Romanello – who has promised to wear his lucky hat from last season’s victory – will also sit down at the felt today.

The total entry should pass last year’s mark of 563 fairly easily, with as many as 400 entries expected to line up for today’s eight levels.