Vasily Firsau leads the remaining twenty-four players in the WPT Grand Prix de Paris Main Event – with the tournament still three places away from the money. 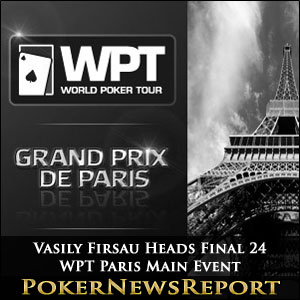 Vasily Firsau leads the remaining twenty-four players in the WPT Grand Prix de Paris Main Event – with the tournament still three places away from the money.

The WPT Grand Prix de Paris failed to reach the money yesterday despite a long six-level day from which just twenty-four players remain. At the top of the leaderboard is Vasily Firsau from Belarus, who takes a substantial chip lead into the penultimate day of the tournament after eliminating Roger Hairabedian in the last hand of the night A♠ 6♥ > 10♥ 10♠.

Firsau (756,000 chips) is followed in the event by Peter Apostolou (548,000 chips) and Jean-Norel Thorel (458,000 chips), who was responsible for busting Todd Terry A♥ K♥ > A♦ Q♣, with the field also containing last year´s winner of the event Matt Salsberg and 2012 WPT World Champion Marvin Rettenmaier.

One of the features of the day concerned the remarkable comeback by Byron Kaverman who was the bubble boy in the WSOPE High Rollers Event last week. Kaverman had been reduced to 5,000 chips during Day 2, after being crippled by Kara Scott K♥ K♦ > A♥ J♠, but had recovered to enter Day 3 with 33,900 chips.

Guoga Leaves in a Huff and Flies to London

However, not every player enjoyed the same level of success – especially Tony Guoga. While the current Team Party Poker were enjoying a profitable day at the tables (Kara Scott joined Marvin Rettenmaier in the final 24 when busting out Day 1B chip leader Hicham Hilmi A♦ K♥ > J♥ J♦) , it was not such a successful day for their former partner Tony “G” Guoga.

Guoga had started Day 3 of the WPT Grand Prix de Paris with a precarious stack of 24,500 chips, but had managed an early double up against Hicham Hilmi. His good spirits lasted only thirty minutes and, after being slow-rolled by a player with Quads, went on full tilt when being bust from the tournament by Timothy Adams A♥ 8♠ > A♣ Q♣. Guoga was seen storming out of the Aviation Club de Paris and several hours later late registered for the WPT Alpha 8 Event in London.

When the 24 remaining players re-convene at the Aviation Club de Paris this afternoon, the intention is to play down to a final table of six. The game will resume with blinds of 2,500/5,000 (ante 500) with Jonnie Sonelin (77,500 chips), Micah Raskin (64,000 chips) and Elliot Smith (48,500 chips) the three players most at risk of being eliminated before the money bubble bursts.