After three opening flights of the World Poker Tour Prague Main Event, Vasili Firsau leads 157 survivors (plus a few latecomers) into Day 2 of the tournament. 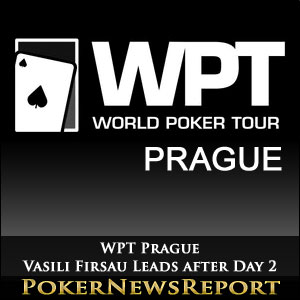 After three opening flights of the World Poker Tour Prague Main Event, Vasili Firsau leads 157 survivors (plus a few latecomers) into Day 2 of the tournament.

An unfortunate clash of schedules between the European Poker Tour and the World Poker Tour led to a fairly quiet three opening days of the WPT Prague Main Event. Only 40 players ponied up the €3,300 buy-in for the tournament on Day 1A but with a better turn-out on Days 1B and 1C, and the opportunity for players to re-enter/late register up until the start of play today, the current number of entries stands at 271 – less than half the number who competed in the WPT Prague won by Marcin Wydrowski last December.

Firsau Takes the Honours on Day 1A

Eight full levels of play were completed on each of the three opening flights and, after all the chip counts were put side-by-side, Belarus poker player Vasili Firsau heads the tournament overall. Unusually, Firsau was one of the twenty-two players who survived (the boredom) on Day 1A to carry through a stack of 167,700 chips into today´s proceedings (chip leaders on Day 1A do not usually get to have the overall tournament lead because of the fewer number of players) and the majority of his chips were acquired in a big stack -v- big stack clash against Michael Polchlopek, which Firsau won A♦ K♣ > A♥ J♥.

Jason Duval Stars on Day 1B

As more players bust from the EPT Prague Main Event at the Hilton, and drifted across the road to the Card Casino, Day 1B of the WPT Prague Main Event filled up a little better (73 entries/43 got through). Michael Polchlopek was one of those who helped to swell the numbers by firing a second bullet, but he again ran into trouble with his kickers and was eliminated by Jason Duval A♦ Q♦ > A♥ J♦, immediately before Duval doubled-up against Ilan Boujenah 9♥ 8♥ > pocket Tens on a board full of Hearts. Duval subsequently bossed his way through the remaining couple of levels to finish Day 1B with 153,000 chips.

Kuljinder Sidhu Gets the High Fives on Day 1C

Things were a lot busier and a lot tighter on Day 1C of the WPT Prague Main Event – so much so that eleven players finished with stacks in excess of 100,000 chips, as opposed to two players on Day 1A and three players on Day 1C. At the top of the Day 1C chips stacks was Kuljinder Sidhu, who had the double good fortune to flop Quad Fives during Level 7 of the day´s action, and have his opponent shove all-in after making a straight on the River. Sidhu bagged and tagged 133,200 chips at the close of the day – only good enough for fifth place on the overall tournament leaderboard.

Looking Ahead to Day 2 of the WPT Prague Main Event

With registrations still open, there are likely to be several more orphans from the EPT events buying-in to the WPT Prague today – although not a lot as only 14 players were bust from the EPT Main Event and 74 from the EPT High Rollers. Those who do make a last minute entry will receive 30,000 starting chips and will be facing blinds of 400/800 (ante 100) as the tournament enters Level 9.

A further eight 60-minute levels are scheduled for today, during which time the prize fund will be announced and the number of players who will cash in the event. Those with the best opportunity of earning some Christmas spending money include: