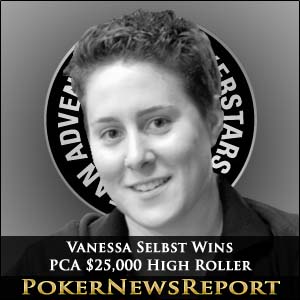 The victory allowed the 28-year-old to take over first place on the all-time money list for female players in live tournament action with $6,996,315 in career earnings. Selbst catapulted over Kathy Liebert, who now sits in second place in lifetime earnings at $5,818,241.

Selbst began final table play with the fourth largest chip stack, but was able to overtake chip leader Shaun Deeb when Ole Schemion went all-in with Ace-high against a full house held by Selbst. Deeb was then eliminated in fifth place by poker’s top female tournament player when his A-10 paired the board with 10-3-2, prompting him to shove all-in with about 1.5 million in chips following a three-bet by Selbst. After tanking for awhile, Selbst made the call with A-K and took the hand when a King appeared on the river.

In heads-up action versus Vladimir Troyanovskiy, Selbst once again benefited from a lucky river card. The Russian got all his chips in the pot with K-K in the hole. It looked as though pocket Kings would hold up and allow Troyanovskiy to double up when the flop showed 8-2-2 and the turn card was a 10. But an Ace on the river secured the title for Selbst, the 11th of her career, and pushed her into 39th place on the all-time tournament money list.

I’ll take it, Selbst told PokerStars’ commentator Joe Stapleton, admitting that she ran ridiculously hot at this final table. Any title is awesome, and I have never won a high roller before. It feels really great to be able to beat the best.

Troyanovskiy earned $792,180 for his runner-up finish and the third place showing of Michael Watson was good for $462,320. Schemion’s fourth place finish added $354,860 to his career total, while the unlucky river card for Deeb secured $289,880 for fifth place.

Selbst has been competing on the live tournament circuit less than seven years and her resume includes 14 cashes of more than $100,000, with two of those eclipsing $1 million. The Brooklyn, New York native has also won two WSOP bracelets.

Here is a list of the top ten all-time female winners in live tournaments: