Controversy has already erupted at the 43rd annual World Series of Poker (WSOP) in Las Vegas – over toilet facilities! 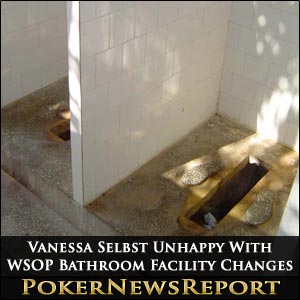 Controversy has already erupted at the 43rd annual World Series of Poker (WSOP) in Las Vegas – over toilet facilities!

Two bathrooms are situated along one wall in the Convention Center’s main hallway of the Rio All-Suite Hotel & Casino – one for men and the other for women – but organisers have decided to reserve both for male competitors this year as they attempt to avoid long queues.

These toilets are close to the Amazon Room – which is the prime event space at the poker festival – making them convenient for the majority of players, so one-time WSOP bracelet winner Vanessa Selbst is not happy at all with the changes put in place.

The Team PokerStars Pro, while accepting that this make sense for the starting days of huge events – when there are normally big lines for the men’s bathroom – is not impressed by the decision to make both facilities male-only when smaller fields are assembled.

The 27-year-old American pro – who was involved in the $1,500 buy-in No-Limit Hold’em event – spoke to Card Player about this move, stating that, on days like today, when there is never a huge line outside the men’s room, there is not that big of a space issue.

The Brooklyn native continued by saying that this sends a really bad message to women as creating this male-only environment is not inviting females to get involved in poker.

Selbst did, however, point out that there is no problem in the Brasilia and Pavilion Rooms as toilet facilities are close by, but also stressed that having to leave the Amazon Room to answer the call of nature is difficult as women can only really do this during a break in play. The upshot of this, Selbst believes, is women will now have to wait until a hand is played out.

The 2008 $1,500 buy-in Pot-Limit Omaha champion has already received messages of support from fellow female pros, including Taiwanese-born Maria Ho, who took to microblogging website Twitter to write: @VanessaSelbst @wsop I strongly agree with Vanessa and am extremely concerned about the message it sends. Please reassess.

While Vegas-based Linda Johnson – who is a Poker Hall of Famer and a one-time WSOP champion – later tweeted that the organisers had overturned the decision, WSOP communications director Seth Palansky revealed that a meeting will be held later today to talk about the matter.

However, he did emphasise that there was a good rationale for reaching this decision to change the toilet facilities as, according to Palansky, approximately 97% of the players who take part in the WSOP are men.

He also stressed that portable toilets for men and women are available to use just outside the Amazon Room, while stating that the Rio cannot build new bathrooms – even if they wanted to – as there is a lack of available space.

Palanksy will probably be sick of hearing complaints from Selbst – no matter how reasonable – in relation to the world’s largest poker festival after she previously criticised organisers for ignoring their female competitors’ needs.

She added that, in addition to this latest controversy, there have been instances when it feels like they aren’t really inviting of women, suggesting that making statements such as ‘let the best man win’ are off-putting to female competitors.

Selbst – who is sitting in fifth place from 15 survivors after Day 2 of event #2 – continued by highlighting that the ladies’ event was introduced in an effort to “invite women to poker”, but that forward-looking decision is pretty well nullified when “you get things like this”.

She believes that “it’s really counter-productive”, while stressing that, although it doesn’t appear that “anyone is doing it on purpose”, she reckons “people just don’t see the implications”.

Additionally, Selbst is adamant that making these changes to the bathrooms near to the Amazon Room is not “a small point”.

It certainly should be interesting to see how Palansky and his fellow organisers address this reasonable complaint today. We at Poker News Report will, of course, keep you posted on the outcome of the meeting.