Team PokerStars Pro Vanessa Selbst is the chip leader after the first day of the $5,000 six-handed pot-limit Omaha event of the World Series of Poker (WSOP) of 2011 in Las Vegas. 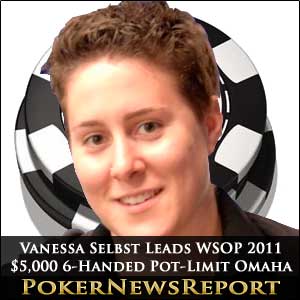 Team PokerStars Pro Vanessa Selbst is the chip leader after the first day of the $5,000 six-handed pot-limit Omaha event of the World Series of Poker (WSOP) of 2011 in Las Vegas.

The Brooklyn-based pro had accumulated 250,300 chips at the end of play in the Amazon Room last night as she aims to collect the $619,575 top prize, with Californian Erick Lindgren not too far behind in second on 208,700.

There was a certain amount of uncertainty regarding how popular the inaugural six-handed pot-limit Omaha would go down with players, but a healthy 507 competitors registered to produce a prize pool of $2,382,900.

WSOP bracelet winners Selbst and Lindgren are followed by New York State’s Shaun Deeb on 195,000, Vincent Vanderfluit, of the Netherlands, on 194,500, and California-based Canadian Mike ‘timex’ McDonald on 181,100.

McDonald, in his first WSOP, steadily built his chip stack during the day at the Rio All-Suite Hotel & Casino, but one particular hand late in the day highlighted his day-long heater.

New Yorker Amnon Filippi got his short stack all-in pre-flop against McDonald – who became the youngest ever European Poker Tour (EPT) champion with his German Open victory in Dortmund back in February of 2008 as an 18-year-old for €933,600 ($1,370,161).

Filippi showed As-Ah-9h-2d, while McDonald: revealed Ad-7c-Kd-10c. Filippi’s aces had him ahead, but the Jc-Ks-Qs flop changed all that as it gave McDonald a straight.

The 9c turn and 6c on the river improved Filippi to a flush, but he was still eliminated, causing McDonald to state that “this is the best I’ve ever run in a tournament – and I run good all the time!”.

McDonald and some others were certainly were running good, but not everyone was quite so fortunate, with the likes of pros Daniel Negreanu, Scott Seiver, Yevgeniy Timoshenko, Robert Williamson, Joe Cada, Eric Baldwin, Barry Greenstein, Sammy Farha, Galen Hall, Carlos Mortensen and Bertrand ‘ElkY’ Grospellier all hitting the rail on day one.

Interestingly, also surviving the opening day’s play were Colorado duo Kevin Boudreau and Chance Kornuth, who were the respective runner-up and winner of last summer’s $5,000 nine-handed pot-limit Omaha event and who just happened to be at the same table for much of the day.