New York’s Vanessa Selbst collected her second bracelet after taking down the $2,500 buy-in 10-Game Mix Six-Handed event #52 of the World Series of Poker. 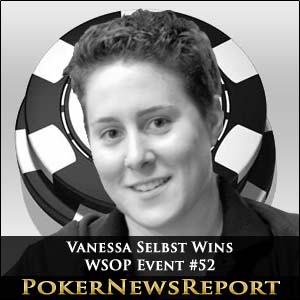 New York’s Vanessa Selbst collected her second bracelet after taking down the $2,500 buy-in 10-Game Mix Six-Handed event #52 of the World Series of Poker.

In fact, Selbst – who knocked out all but one player at the final table – is the first woman to secure a bracelet from an open event since she picked up her first back in 2008 when winning the $1,500 buy-in Pot-Limit Omaha event #19.

Day 3 started with 19 players in contention for the crown, but Selbst ultimately defeated Pennsylvania’s Michael Saltzburg heads-up to leave the latter with $150,849 as runner-up.

Selbst held a healthy 2,640,000 chips compared to Saltzburg’s 516,000 when heads-up play began. But Selbst increased that lead by winning five of six hands played during a round of 2-7 No-Limit Single Draw, while Saltzburg saw his chip stack decrease even further during a round of Omaha Hi-Lo 8 or Better.

Selbst finished off her opponent early in a round of 2-7 Limit Triple Draw. The final hand saw Selbst open from the button, Saltzburg call and draw two. Selbst then drew one and Saltzburg bet. But Selbst then raised and Saltzburg made the call. Both players decided to stand pat with Saltzburg all-in for his last few chips, only for Selbst to reveal the nuts with 7♦ 5♣ 4♠ 3♠ 2♥.

The third and final day saw the field cut back to the final table inside three levels, with Vegas-based Scott Clements eliminated in eighth place for $21,645 and Frenchman Julian Renard hit the rail in seventh for $21,645 after his pair of eights lost out to Selbst’s two pair in a hand of Stud Hi.

Thirty more minutes passed before Selbst sent Fort Wayne’s Thomas Chambers crashing out in fifth place for $43,099 during a hand of Razz. Chambers made an ace low while Selbst made a nine eight low for the elimination.

Chris Bjorin Out in Fourth

London-based Swede Chris Bjorin exited in fourth for $64,649 after losing to Selbst in a Limit Hold’em hand. Selbst opened with two bets and small blind Bjorin made it three. Selbst then made it four and Bjorin called to have just 3,000 chips left.

The 6♦ 3♦ 10♣ flop saw Bjorin toss in the remainder of his chips and Selbst make the call. Bjorin showed K♣ Q♠ while Selbst held A♦ 7♣. The J♥ turn and 10♦ river changed nothing as Selbst notched yet another knockout.

Washington State’s Tommy Hang had remained fairly quiet for much of the final table, but was committed during a hand of Stud. However, it was Saltzburg who scored this elimination when sending Hang to the rail in third place for $97,884. Saltzburg’s full house of jacks and threes had Hang drawing dead at sixth street.