Vanessa Selbst has blasted into the top five on the Global Poker Index for the first time after what has been a rather quiet couple of weeks on the rankings. 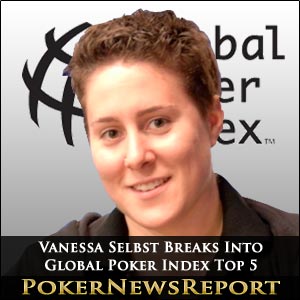 American Vanessa Selbst has blasted into the top five on the Global Poker Index (GPI) 300 for the very first time after what has been a rather quiet couple of weeks on the rankings.

That lull ended last week with results from the European Poker Tour (EPT) Copenhagen and the LA Poker Classic (LAPC) affecting standings throughout the top 300, although American pro Jason Mercier remains in the number one spot.

New Yorker Selbst leapt three places into fifth spot on the GPI 300 after winning the LAPC $5,100 buy-in No-Limit Hold’em event for $140,295 when defeating 2010 World Series of Poker (WSOP) main event champion Jonathan Duhamel heads-up in California to leave the French-Canadian with $121,115 as runner-up.

Duhamel’s rise is particularly impressive, though, as he sat down in 82nd place just ahead of the PokerStars Caribbean Adventure (PCA) in early January, but has since notched a quartet of six-figure cashes to zoom up 21 spots.

However, Ukrainian Eugene Katchalov has dropped out of the top four placings on the index for the first time since the system was introduced to sit in sixth place on 2,463.12 points.

Incredibly, the 31-year-old – who was raised in Brooklyn – had held on to fourth place for 16 consecutive weeks before falling two spots on the latest rankings, while the one-time WSOP bracelet winner had previously moved into and out of third and even came close to the number one spot in October last year when holding second place for three successive weeks.

But Katchalov lost 246.25 points – the biggest drop on the GPI 300 – after several scores aged into lower periods, with his third place for $453,812 at last September’s €5,000 buy-in No-Limit Hold’em main event at EPT Barcelona dropping into Period 2 to cut his points total by 110.

That result had a knock-on effect, too, as his first place in last summer’s WSOP $1,500 buy-in Seven Card Stud for $122,909 no longer counts towards his total and resulted in an additional loss of 132 points.

Canadian Shawn Buchanan (2,711.02) added 38.53 points to his score to move above Katchalov into fourth place.

Shawn Buchanan On the Up

While Buchanan lost points in Periods 1 and 4 as these results aged, he actually made a positive move as those two scores knocked out other results in Periods 2 and 5 to ultimately give him extra points.

Team PokerStars Pro Mercier, meanwhile, was one of only four players inside the top 20 to stay put on the latest rankings as he held on to all of his 2,993.04 points, while eight-time WSOP bracelet winner Erik Seidel overtook French Triple Crown winner Bertrand ‘ElkY’ Grospellier in second place.

Seidel actually benefitted from ageing scores as results from last year’s LAPC – including his first place for $144,570 in the $25,100 buy-in High Roller – and 2010 moved into periods that were previously not full, so improving his overall score significantly.

Katchalov might have been hardest hit on the rankings, but he wasn’t the only player to suffer as 50% of the top 20 saw a minimum of one score fall into a lower period, while five witnessed at least two scores age.

New York State’s Will ‘The Thrill’ Failla (2,362.00) was one of those to see several scores age, resulting in a net loss off 64.38 points and a fall of two places into eighth.

The 44-year-old added 188 points from his fourth place for $41,334 in last month’s $2,500 buy-in No-Limit Hold’em main event at the Deep Stack Extravaganza I in Vegas as his victory for $758,085 at August’s Legends of Poker main event aged into Period 2 to ensure that his latest score is included in Period 1.

Unfortunately, the overall effect of that score ageing, combined with his 2009 and 2010 LAPC results – which included third, fourth and sixth in the latter – ultimately negatively affected his overall score.

The Toronto pro might have added 138 points from that finish, but – with four scores already counting in Period 1 – he only managed an eight-point gain in that period as that result replaced the 130 points he had picked up from his ninth place finish at last December’s $5,000 buy-in No-Limit Hold’em event at the Doyle Brunson Five Diamond World Poker Classic in Vegas.

But his 17th place for $50,340 at last year’s LAPC Championship event aged to cost him 112 points, so resulting in his drop in the rankings.

The $5,100 No-Limit Hold’em event at the latest LAPC also saw five other players, including Duhamel and Selbst, gain on the latest rankings list, with Pittsburgh’s Josh Brikis leading the way by moving up 108 places to 161st on 1,340.20 points after taking third in the Commerce Casino tournament for $61,790.

Brikis had dropped out of the GPI 300 late last December, but enjoyed the biggest rankings leap after picking up 233 points from his LAPC score, which was also boosted by his third place for $24,189 from January’s Borgata Winter Open $1,650 buy-in No-Limit Hold’em Bounty event in Atlantic City.

The 30-year-old from Indiana had lost 12 places the previous week when dropping 154 points, so this will come as a welcome boost.

Dan Shak was among the players returning to the GPI 300 after the Vegas pro – who had finished as runner-up to Viktor ‘Isuldur1’ Blom in the PCA Super High Roller in January – again recorded a second place finish in a high roller event, this time at the LAPC for $137,780, to take 167th place on 1,323.64 points.

Meanwhile, another Sin City player, Dan Fleyshman, was among five pros to debut on the rankings after he collected $114,800 for third at the LAPC high roller to come in at 279th on 1,085.87 points.

Sticking with the LAPC, Californian Edward Sabat (1,172.10) moved up 68 places to 222nd following his sixth place in the Bounty Championship for $5,340, while other final table players Andy Frankenberger, of the USA, and Canadian Owen Crowe also enjoyed a profitable week.

Sabat added 89 points as none of his scores aged, and the same goes for one-time WSOP champion Frankenberger, of Massachusetts, who picked up 80 points for finishing eighth for $3,400 in the same event to climb 31 spots into 159th on 1,346.99.

Pierre Neuville Takes Over in 35th

Other notable movers from recent victories were Englishman Max Silver and Fabrice Soulier, of France.

Of course, that means 11 players dropped out of the GPI 300, and they are Russian Konstantin Streletskiy – who only made his debut the previous week at 279th – as well as Seattle-based Indian Vivek Rajkumar, Englishman Surinder Sunar, Americans Jason DeWitt and Tyler Cornell, Hungarian Richard Toth, Latvia’s Mihails Morozovs, Belgian Matthias De Meulder, Israeli Saar Wilf, Canada’s Simon Charette and Swede Per Linde.

However, Michigan’s Dan Heimiller (1,059.73 points) suffered the biggest drop as he fell 86 places to 298th after his 20th place for $14,135 from last year’s WPT Legends of Poker main event fell into Period 2 to leave him with just one Period 1 score.

If that wasn’t bad enough, the American’s 20th place for $43,800 at last February’s LAPC main event aged into Period 3 to hit his overall score hard.

Evgeny Zaytsev Falls Down to 291st

The next rankings list should again see noteworthy movement as the $10,000 buy-in No-Limit Hold’em Championship event from the LAPC main event closed with American Sean Jazayeri taking top spot for $1,370,240.

Follow us to stay informed on the latest online poker news and the latest developments on the GPI.