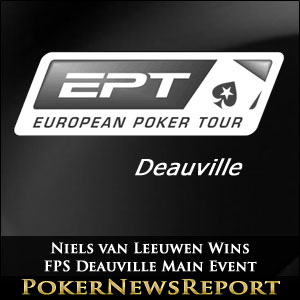 Throughout 2014, stops on the European Poker Tour are being preceded by Main Events on the “local” circuits, and this weekend it was the turn of the France Poker Series to host an event prior to the EPT Deauville Main Event at the Barriers Casino in north-west France.

One of the benefits of synchronising the schedules is that huge numbers attend the events; and the third running of the FPS Deauville was no exception – attracting a record field of 1,112 players over two opening days to the €1,100 Main Event.

By Sunday, the field had been reduced to a final table of eight, headed by Jean-Paul Vasseur, one of seven French nationals at the final table:

Play at the start of the FPS Deauville final table was pretty hectic, and – to the enjoyment of the French supporters – Niels Van Leeuwen did not get off to the best of starts; being reduced to short-stack when doubling-up Erwann Pecheux A♥ K♦ > 10♣ 10♠.

Pecheux enhanced his chip stack further when slow-rolling Fahd Kaabat out of the tournament with A♠ A♥ > Kaabat´s paired 10♥ 7♦, but Van Leeuwen doubled back up quickly against Pecheux with J♦ J♥ > 5♦ 5♠ and prevented the 22-year-old Parisian from running away with the event.

Ropert somehow managed to survive the increasing blinds, and it was Erwann Pecheux who was the next player to be sent to the rail after being forced off a valuable pot by Jean-Paul Vasseur and then getting the last of his chips into the middle with 4♥ 4♣. Niels Van Leeuwen made the call with A♥ Q♣ and hit both his pocket cards on the board of Q♠ 2♥ J♣ / A♦ / 5♣ to eliminate Pecheux in sixth place.

Leroux and Ropert Eliminated as Dutchman Begins to Fly

The eliminations of Christophe Leroux and Corentin Ropert came in quick succession and saw Niels Van Leeuwen move up to the top of the chip counts. Leroux´s departure was a fairly standard flip with A♠ 9♠ against Van Leeuwen´s A♥ 10♣ in which Leroux failed to hit a nine or a board full of Spades, but Ropert´s was a little unfortunate.

Corentine Ropert had moved all-in from the button with A♦ 8♥ and was called by Van Leeuwen holding K♠ Q♥. The flop of 10♥ 9♣ 3♦ kept Ropert in the lead and looking good for a double-up, but the Q♠ was dealt on the Turn to pair Van Leeuwen´s hand, and there was to be no miracle three-outer on the river, as the 2♦ bricked for Ropert and sent him from the final table in fourth place.

Going into the heads-up, Jean-Paul Vasseur had a 16.025 million -v- 11.190 million chip advantage over Niels Van Leeuwen after busting out Yehoram Houri in third place K♠ 3♥ > K♦ Q♣ on a flop of K♥ 3♦ 3♣; however, Van Leeuwen quickly moved into a massive chip advantage when shoving all-in with A♣ A♠ and getting a call from Vasseur (5♠ 5♥).

Vasseur twice managed to double up when going into a showdown with the second-best hand, but it was not to be third time lucky when he shoved his chip stack into the middle with A♦ 7♣ and failed to find the Ace he needed to improve past Van Leeuwen´s K♥ K♣.

The small Dutch contingent (and a lot of British railbirds) at the Barrier Casino made themselves heard above the wailing of the French supporters, as Niels Van Leeuwen joined Canadian Patrick Braga and German Marvin Rettenmaier on the list of (non-French) winners of the FPS Deauville Main Event.