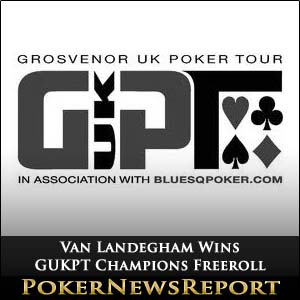 A total of 94 players – including WSOP November Niner James Akenhead, 2012 GUKPT Leaderboard winner Martin Holmes and GUKPT sponsored pro Jeff Kimber – were invited back to play in the £100,000 GUKPT Champions of Champions tournament after winning a GUKPT Main Event or Side Event on the 2012 Tour.

However, despite the presence of some very experienced professional poker players from the UK, it was Belgian real estate agent Serge Van Landegham who emerged triumphant from the two-day event and left Luton with the £22,630 first prize.

Van Landegham, who qualified for the event courtesy of victory in a £100.00 side event in Blankenberge, is a self-confessed recreational player with only one previous cash (for £160.00) recorded in the Hendon Mob live poker database.

In order to win the tournament, Van Landegham had to overcome the UK´s poker player in form – Simon Deadman. Deadman, who won his invitation to the Champion of Champions tournament with victory in the GUKPT Blackpool Main Event and only recently took down the WPT National in Dublin, has appeared on six other major tournament final tables in the past six months.

After starting the final day second in chips, Deadman took a commanding chip advantage into the Heads-Up when eliminating Fadil Isufi in fourth position and GUKPT Goliath Champion Les Fenton in third. However, Serge Van Landegham was not about to give in easily (and when does a real estate agent ever give in?).

Van Landegham doubled up twice in quick succession – the first time coming from behind in an A9 > AK race, and then turning a King-high flush against Deadman´s unpaired Ace-high. Van Landegham wrapped up the GUKPT Champion of Champions event when getting Deadman (AJ) to call his post-flop shove on a board of K-8-8. Van Landegham was holding 9-8, and the trip Eights held to give the Belgian the title.

Serge Van Landegham joins previous winners of the GUKPT Champion of Champions Luke Fields, Colin Wu and Ash Hussain and said after the event “Work permitting, I will travel back for more GUKPT events as the tour experience was thoroughly enjoyable.”

Dates for the Grosvenor UK Poker Tour have recently been announced. The 2013 tour kicks off in London´s Grosvenor Casino in Piccadilly on 24th February and concludes at the same venue for the £400,000 guaranteed Grand Finale in November.

The eleven other stops on the tour will once again include the week-long £200,000 guaranteed GUKPT Goliath at the Ricoh Arena in Coventry (which still holds the record for a European land-based poker tournament) and a total of £1,750,000 is guaranteed among the events scheduled for the series.

Keep up to date with all the GUKPT news and results on PokerNewsReport or follow us on Twitter.