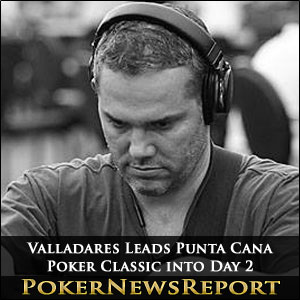 There was a superb turnout for the Americas Cardroom-sponsored Punta Cana Poker Classic in the Dominican Republic which started on Tuesday at the Hard Rock Hotel & Casino. 490 players ponied up the $1,650 buy-in or [geolink href=”https://www.pokernewsreport.com/americas-cardroom”]qualified online at Americas Cardroom[/geolink] to create a $712,950 prize pool – smashing the $½million guarantee

A couple of well known players also gave their support to this event – Marc Etienne “Go_Irish_Go” McLaughlin was playing in his first live poker event after being bust from the WSOP final table in unfortunate circumstances, and last year´s WPT Montreal Main Event winner Jonathan Roy also joined in the fun.

Day 1A Busier but Subdued

Surprisingly – for an event that allowed players to re-enter on Day 1B – Day 1A was the more subdued of the two opening flights. Patrick “prepstyle71” Serda took a substantial chip lead just after the dinner break – courtesy of his J♠ 7♦ catching a Jack on the Flop and busting out a player who had moved all-in with 10♦ 10♥, and his dominance lasted until the end of the day.

Serda headed the 94 survivors of the 274 players who registered for Day 1A, and carries forward 173,500 chips into Day 2 – good enough for second place overall. Other notable players to safely negotiate Day 1A of the Punta Cana Poker Classic included last year´s runner-up in this event Karlo Lopez (32,500 chips) and recent winner of the WSOP Southern Indiana Circuit Main Event Zal Irani (87,800 chips).

With the majority of the inline qualifiers taking part in Day 1A, the second opening flight saw more famous faces. WSOP November Niner Marc Etienne McLaughlin did not enjoy such a deep run on this occasion – busting out before the dinner break on Day 1B – but Jonathan Roy carries forward 146,400 chips into Day 2 today and has a chip stack well above the overall average of around 54,000.

Chip leader at the end of the day – and overall in the tournament – was Costa Rican cash game player William Valladares, who flew under the radar until the chips were bagged and tagged at the end of the night, and will have significantly more attention paid to him when play resumes at the Hard Rock Hotel & Casino at 2.00pm this afternoon.

A further ten 50-minute levels are scheduled for today, during which time it may be possible that the prize money is reached. 171 players remain in the Punta Cana Poker Classic Main Event, from which the top fifty will get paid. With blinds increasing to 750/1,500 (ante 200) when play resumes, some of the short stacks will be gambling for their tournament lives – and not all of them will win!