Vaidas Sirionas and Mick Corrigan travelled together to the GUKPT Cardiff, and returned to Bristol having shared the first prize in the GUKPT Main Event. 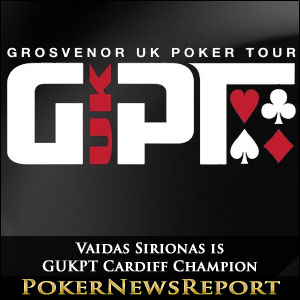 Vaidas Sirionas and Mick Corrigan travelled together to the GUKPT Cardiff, and returned to Bristol having shared the first prize in the GUKPT Main Event.

Pitching Leg 6 of the Grosvenor UK Poker Tour against the WSOP Main Event and WPT500 was a brave decision by Grosvenor Casinos; and it nearly paid off, as 177 players entered the £500.00 buy-in Main Event – leaving organisers with an £11,500 overlay to find in order to meet the £100,000 guarantee.

After two days of action, thirteen players returned to the G Casino in Cardiff´s Red Dragon Centre. The pace of the action was tedious to begin with but, after nearly three hours of play, the nine-handed final table was set when Mick Corrigan bust GUKPT Walsall winner Ben Winsor in tenth place K♦ 10♣ > K♠ 8♦.

Fisher Knocked off Top as he Doubles Up Three Players

The final table got underway with blinds of 6,000/12,000 and a 1,500 ante (Level 21). The early action was dominated by the shortest stacked players shoving at every opportunity and, although the strategy worked for some, it signalled the demise of Tim Marshall in ninth place after he moved all-in on the flop of 4♥ 2♥ K♦ with 9♥ 9♠ and failed to improve past Vaidas Sirionas´ K♠ J♠.

Ralph David left the GUKPT Cardiff final table in eighth place shortly after when his paired A♦ 10♣ fell to James Fisher´s rivered set of Sevens, but then there were successful double ups for Nik Stylianou (6♣ 6♠ > Fisher´s A♣ 10♦), Rob Thomas (8♦ 8♠ > Fisher´s A♥ 4♥}) and Charlie Denton (Q♦ Q♣ > Fisher´s A♥ 8♥) to extend the lives of the short stacks and knock James Fisher from the top of the leaderboard.

Mick Corrigan took over at the head of the chip counts when busting James Fisher in fifth place 10♦ 10♠ > 4♦ 5♠, but his lead held only until Vaidas Sirionas eliminated Nik Stylianou in fourth place A♠ K♦ > A♣ 4♣ to give Sirionas the advantage going into three-handed play. Only Rob Thomas stood between Corrigan and Sirionas – two frequent cash game adversaries from the G Casino in Bristol – battling out the heads-up; and he bust in third place when Mick Corrigan´s A♠ K♠ paired its Ace on the flop to best Thomas´ J♦ J♥.

As heads-up play got underway for the GUKPT Cardiff Main Event, Mick Corrigan (1.9 million chips) and Vaidas Sirionas (1.6 million chips) agreed on a deal that would see each take £24,000 and leave the GUKPT trophy and Grand Final seat to play for. Mick Corrigan immediately extended his chip lead when pairing his A♣ Q♣ against Sirionas´ 9♥ 9♣, but a rivered 6♣ enabled Sirionas to get back into contention with two pairs over Corrigan´s flopped pair of Aces.

Vaidas Sirionas edged into a narrow chip advantage with some small ball hands going his way and, when Mick Corrigan announced he was all-in pre-flop late in Level 26 with A♣ Q♦, Sirionas snap-called with Q♠ Q♣. The flop of Q♥ K♠ 7♠ left Corrigan needing a miracle to survive, and it failed to materialize as the Turn (7♥) and River (3♠) blanked for both players – making Vaidas Sirionas the GUKPT Cardiff Champion.