The USA’s federal government has made a strange move by seizing the Bodog.com domain name – particularly as that poker room’s website address is not being used commercially. 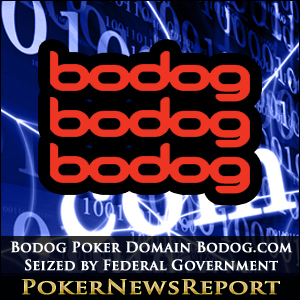 The USA’s federal government has made what appears to be a strange move by seizing the Bodog.com domain name – particularly as that poker room’s website address is not being used commercially in any region throughout the world.

The Department of Homeland Security made the move yesterday evening, resulting in some measure of confusion as Bodog.com has not been operational for about nine months, and was finally rebranded to Bovada Poker on December 14 last year.

Bovada is being operated by Bodog’s former States licensees, the Morris Mohawk Gaming Group (MMGG), and is affiliated to the Bodog Poker Network – which has operated under licence in the US since 2004 – in the same manner as skins on other online poker networks share player databases.

The well-known Bodog brand – founded by Calvin Ayre in 1994 – made the decision to clearly distinguish between their US operations and the rest of the world last year by establishing a distinct poker website for their American customers, with the Bodog.co.uk and Bodog.eu websites remaining unaffected.

However, while confirming the news this morning, BodogBrand also stated that they are “currently consulting” with their legal advisors “with a view to having the domain returned”.

The BodogBrand became aware late on 27th February that the domain Bodog.com had been seized by US Homeland Security.

This domain is not currently in use by the BodogBrand or any brand licensee and has not been in use since the Morris Mohawk Gaming Group (MMGG) switched its operations from Bodog.com to Bodog.eu in May 2011.

The BodogBrand.com revoked its licensing agreement with Morris Mohawk Gaming Group (MMGG) on December 15th 2011 after publicly stating it would do so in July 2011.

It is equally important to state that Bodog UK, Bodog Europe and Bodog Asia have never taken bets from the US.

This last sentence from Bodog could possibly shed some light on the Department of Homeland Security’s decision to capture the domain name, but Poker News Report will – as always – keep you updated on any future developments.