Some of America’s wealthiest people are forging investment and partnership strategies in anticipation of the legalization of internet gaming, especially online poker. 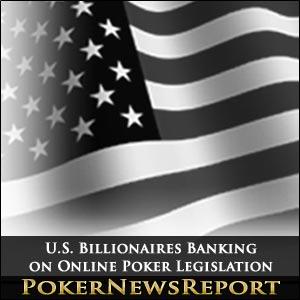 Some of America’s wealthiest people are forging investment and partnership strategies in anticipation of the legalization of internet gaming, especially online poker.

U.S. Digital Gaming, a company founded by Richard Bronson, a former executive of Mirage Resorts, is aimed at providing advertising and software services to gaming companies and government agencies, believing that gambling regulations will surely become a reality in the near future. Bronson’s company has received investment capital from the likes of shopping mall baron and owner of the NBA’s Indiana Pacers, Herbert Simon, as well as real estate tycoon and chairman of Vornado Realty Trust, Steven Roth.

“They are all in it for the long haul,” said Bronson, who also inked deals with William and Robert Taubman, children of billionaire Alfred Taubman. “Not one of them thinks this will be a sprint, they think it will be a marathon.”

Just ten days ago, Donald Trump officially showed his cards in proposed gambling legislation, partnering with billionaire hedge fund aficionado Marc Lasry, saying, “we have been looking at this for a while.”  Lasry’s Avenue Capital Group manages an estimated $12 billion in funds. The billionaires filed an agreement with the U.S. Securities Exchange Commission forbidding each to sign other investment deals that would compete against each other through May of next year.

“This has to happen [online gaming legislation] because many other countries are doing it and like usual the U.S. is just missing out,” Donald Trump said.

Some billionaire partnership ventures for internet gambling haven’t always panned out. Las Vegas casino honcho Steve Wynn had inked an agreement in April with PokerStars, but was forced to cancel the partnership a few days after signing when PokerStars was indicted along with Full Tilt Poker and Absolute Poker in the Black Friday allegations that have rocked the online poker industry. Wynn hasn’t publicly revealed any new course of action regarding online gaming, but does support online poker legislation. “We are convinced that the lack of regulation of internet gaming within the U.S. must change,” Wynn said.

Wynn wasn’t the only billionaire who had to terminate an agreement with one of the three online poker companies facing charges in the Department of Justice’s crackdown on [geolink href=”https://www.pokernewsreport.com/us-poker-sites”]poker sites accepting US players[/geolink]. Frank and Lorenzo Fertitta, the wealthy brothers who co-own Station Casinos, tore up their deal with Full Tilt Poker following the Black Friday filings. But the billionaire brothers haven’t been frightened away from internet gaming. Fertitta Interactive, co-founded by the pair in 2010, is going strong, having recently purchased CyberArts, a California-based company that focuses on producing online gaming software. “Fertitta Interactive fully supports the federal regulation of online poker in the United States,” Lorenzo Fertitta stated last month.

The investment of capital in online poker and gaming by some of America’s wealthiest people in anticipation of regulations coming either federally or at the state level is not something to be taken lightly. Billionaires know where the money is. That is one of the reasons that they are, indeed, billionaires. The online gaming market in the U.S. has for years been operating in the gray area of U.S statutes with much of the wealth and riches being enjoyed by offshore companies. But with prominent U.S. billionaires now putting their cards on the table and investing heavily in U.S legislation, it appears that online gaming legalization is only a matter of time.