Online poker regulation is slowly spreading throughout the U.S. and the new poker sites that arrive will compete directly with the existing U.S.-friendly sites. 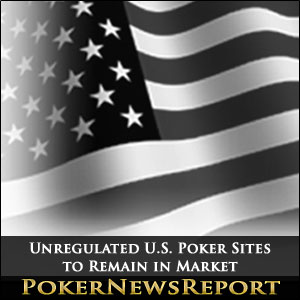 Online poker regulation is slowly spreading throughout the U.S. and the new poker sites that arrive will compete directly with the existing U.S.-friendly sites.

That competition will pit regulated sites against those that operate without the blessing of U.S. authorities. Many wonder if the advancement of online poker legalization will eventually force unregulated poker rooms such as Carbon Poker, Americas Cardroom and Bovada Poker out of the market.

A recent article published at pokersites.us does an excellent job of examining this issue and theorizes that the current poker sites catering to the U.S. market need not worry about their eventual demise. I tend to agree. It is highly likely that the existing U.S.-facing sites will find a niche in the market apart from the newly-regulated sites.

Expounding on the theory first presented by the pokersites.us article, regulation in the U.S. is moving at such a slow pace that American players who currently play at Black Chip Poker and the like have no reason to believe that player traffic will dwindle anytime soon. Only two sites are legal in the U.S. at this time, with recent reports indicating that other online poker licensees in Nevada have requested more time to go live with their Internet offerings.

Players in New Jersey and Delaware will soon have the option of playing at regulated poker sites. But that will make only three states out of 50 that have legalized online poker. Players from the other 47 states need sites at which to play, with Bovada Poker and the rest providing that service.

Some industry observers believe that once other states see the success of online poker and gambling at the trio that are first to test the waters, that regulation may advance in other states much more rapidly. But recent history shows us that introducing and passing legislation, investigating potential licensees, and software testing of the online products to be offered takes a great deal of time. Years, in fact, from the beginning of the process until the end.

With no other states seemingly close to even passing such legislation, Nevada, Delaware and New Jersey may be the only three operating regulated online poker sites until late in 2014, and possibly 2015. So if you’ve been contemplating depositing at Americas Cardroom to take advantage of the 100% up to $1,000 deposit bonus but are waiting to see if regulation comes to your state soon, it’s probably better to make that deposit while you’re still young.

Speaking of Americas Cardroom and the other skins on the Winning Poker Network (WPN) such as Black Chip Poker, American players have been making their way to those skins at a feverish pace as of late. WPN has passed both Revolution and Merge in player traffic and now enjoys second place status in ranking among U.S.-facing poker rooms and networks.

The reason? Outstanding promotions and payment processing efficiency. WPN gets high marks for the speed in which players receive their withdrawal requests. With player bonuses and timely cashouts operating smoothly, many players may not want to leave the favorable WPN skins even if regulation makes it to their state of residence in a year or two (or three).

Keep in mind also that not all states are expected to embrace online poker and gambling legislation. While several are sure to follow the lead of Nevada and New Jersey, others will not for various reasons. There are still a number of organizations and people that are opposed to gambling and its proliferation throughout society.

The anti-gambling crowd will likely make their voice heard in a number of states, resulting in lawmakers failing to either introduce or pass such legislation. While the numbers are not yet certain, as many as half of the 50 states may be inclined to not jump on the Internet poker bandwagon.

That leaves a void in a large area of the U.S. that unregulated sites such as Bovada and Americas Cardroom will be more than happy to fill. Players in states without regulation who want to play online poker will continue patronizing the poker sites catering to that market.

There currently is a niche in the online poker industry for unregulated sites to provide their offerings to American players. As online poker legislation progresses in the U.S., that niche may become a bit smaller. However, it likely won’t become small enough to wipe out WPN, Bovada and the rest. Those unregulated online poker rooms are here to stay.

One Reply to “Unregulated U.S. Poker Sites to Remain in Market”