Summer officially begins today and with it comes a new promotion by Ultimate Poker that will reward its loyal players with $1 million in bonus cash. 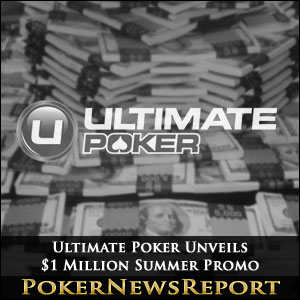 Summer officially begins today and with it comes a new promotion by Ultimate Poker that will reward its loyal players with $1 million in bonus cash.

Currently the only regulated real-money online poker site in Nevada, Ultimate Poker has announced that its “Million Dollar Summer” promo kicks off with a $50 cash bonus. To be eligible, players need only deposit $50 by midnight on Saturday, June 22 and play 100 raked cash game hands by midnight on Monday, June 24. The $50 bonus will be credited to player accounts on Wednesday, June 26.

More cash bonuses await players who wear a free Ultimate Poker patch while playing at live Nevada poker tables. Those sporting the patch need only tweet a photo of themselves while seated at a poker table to @ultimatepoker and use the #PatchME hashtag. Two winners will be selected daily among the best tweets over the next four weeks and will be awarded $100 cash in their UP accounts.

Winners of the PatchME contest will receive a free entry to a $15,000 Main Event Freeroll. The champion of the freeroll is guaranteed a seat in this year’s $10,000 buy-in WSOP Main Event. Another $5,000 will go to the final tablists of the freeroll. Entries are capped at a 90-player maximum for the freeroll, allowing 10% of the patch winners to be rewarded with additional cash. The free patches are available at the Red Rock Casino Resort Spa, Green Valley Ranch Resort and Spas, and the Palace Station Hotel and Casino.

The most loyal players at Ultimate Poker also figure into the summer promo, as VIPs will be awarded tokens into their online accounts redeemable for play at Invite Only SitNGos. The winners of the special SitNGos will earn $500.

UP’s $1 million summer giveaway is aimed at gathering a loyal player following before additional online poker sites launch their product offerings this summer. The next site believed in line to enter the market is WSOP.com, who has plastered the walls at the Rio poker rooms with advertising announcing its anticipated real-money launch. The 44th annual WSOP is currently underway at the casino.

The battle for market share in Nevada is expected to be huge, as state gaming officials have issued a number of operator licenses that are likely to saturate the small Nevada market. For this reason, interstate and international compacts will have to be put in play in the future in order to sustain the competing online poker sites.

Currently, only Nevada residents and tourists can play for real money at Ultimate Poker. But players throughout the U.S. have several options to choose from at U.S.-friendly poker rooms. Check out our U.S. online poker site reviews if you’re an American looking for a reliable online poker room at which to play.