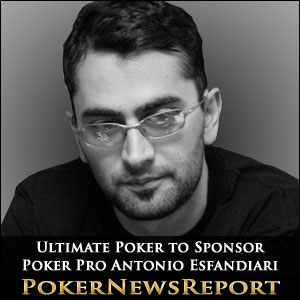 Ultimate Poker, one of the newly licensed online poker sites in the United States in Nevada, has sponsored a top US poker pro. The new Ultimate Poker brand ambassador is the well-known Antonio Esfandiari, also known as ‘The Magician.’ The poker site plans to launch real money online poker games by the end of this year.

‘The Magician’ has earned himself two World Poker Tour titles and three of the much-coveted World Series of Poker gold bracelets. He also entered, and won, the $1 million buy in tournament, Big One for One Drop, last year. At the Big One for One Drop, the 34-year-old poker pro won the largest cash prize that has ever been awarded for a single poker tournament win. The prize money for the most expensive poker tournament buy in was $18,346,673.

Tom Breitling, the Chairman at Ultimate Poker, expressed the online poker site’s delight at having Antonio Esfandiari as their ambassador. He described Antonio as the ultimate champion and modern poker player. Mr. Breitling further noted: [Antonio] brings the gaming lifestyle to the online arena with his work-hard, play-hard attitude.

The new Ultimate Poker ambassador expressed his pleasure at having the chance to represent one of the companies that is now regulated by the Nevada Gaming Commission. He also said: