The rollout of a new variation of Texas Hold’em known as Two Street Hold’em by Ultimate Poker has been postponed to a date that remains uncertain. 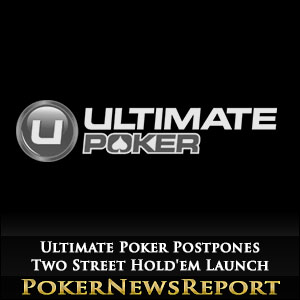 The rollout of a new variation of Texas Hold’em known as Two Street Hold’em by Ultimate Poker has been postponed to a date that remains uncertain.

Two Street Hold’em was conceived by Chris Danek, UP’s Poker Product Manager. The game reduces wagering to only two rounds – before and after the flop. In other words, the entire board of five community cards is revealed all at once directly after players make their bets or fold upon receiving two hole cards. Another betting round commences before the hand’s winner grabs the pot.

Danek’s innovative vision also calls for players to ante up. He apparently devised the game as a way to create more action and less folding. The idea being that less rounds of betting will lead to more players being involved in the hand at showdown.

The new poker variant was tested live using play money at UP offices in Las Vegas, Nevada last Monday. The game’s participants included pro players on the UP roster such as Jason Somerville and Brent Hanks.

Two Street Hold’em was originally scheduled to be launched online at UP’s Nevada offering as a test run this weekend for four hours each day Friday through Sunday. But a recent tweet by Danek advised that he was “going to push 2 Street Holdem to next wk.” Still under consideration are such matters as how much the ante should be and whether the game may be better-suited for 6-max tables as opposed to the 9-man game played at Monday’s live free-play trial run.

UP continues to trail WSOP.com in the Nevada market, currently holding down about 40% of the cash game action. Although launching online almost five months later than UP last year, WSOP enjoys the other 60% of market share.

Over in New Jersey, UP could also use a kickstart. The site continues to look up in the player traffic rankings at Party Borgata, WSOP, and the All American Poker Network.

Innovative concepts such as a new poker variant may be a way to attract players. Whether Two Street Hold’em will catch on remains to be seen. Players will have to wait until the unconfirmed online rollout to check out the new game.