Ultimate Poker has announced that is soon to launch a VIP Program which will use the “Winner Takes All” distribution system to allocate points for rake. 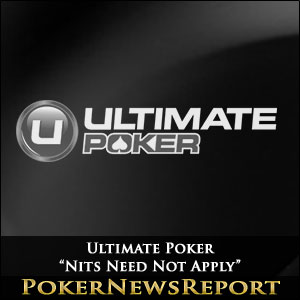 Ultimate Poker has announced that is soon to launch a VIP Program which will use the “Winner Takes All” distribution system to allocate points for rake.

Nevada´s only regulated online poker site has sent a strong message to players who contribute little to the liquidity of the site by announcing that its forthcoming VIP Program will have a “Winner Takes All” points distribution system.

The move has caused a stir among regulars on the site, who have been waiting for a bonus scheme to be introduced, and who were previously accustomed to grinding out bonuses using either the contributed rake system (i.e. Carbon Poker) or the dealt rake system (i.e. Americas Cardroom).

The announcement – made on the popular 2+2 forum – lead to great deal of misunderstanding from some members of the site, who were afraid that only allocating VIP Points to players who won pots would drive away the fish and starve the site of recreational players.

However, Ultimate Poker´s Director of Operations – Terrence Chan – stepped in and cleared the air; explaining how the Winner Takes All points distribution system works and how all but the tightest of players would benefit from it. He concluded by saying:-

When you ask people what makes a game good, they generally say a loose-passive game with people calling off stacks. The plan is to reward the weak players who go to showdown often and keep them in action. Nits need not apply.

Full details of the Ultimate Poker VIP Program have yet to be released, but it is known that the site is proposing a ten-tier system; which will have eight levels based on monthly VIP Points earned and two further levels dependent on a player´s annual VIP Points haul.

The Ultimate Poker VIP Program will be launched when version 2.0 of the software is released – the date of which is not yet known, as the site is waiting for approval from the Nevada Gaming Control Board.

As the World Series of Poker draws to a close, Ultimate Poker will be hoping that approval comes sooner rather than later to prevent what many will predict will be a substantial fall in traffic as players leave Nevada.

How the Winner Takes All System Works

The “Winner Takes All” (WTA) points distribution system works by allocating all the VIP Points awarded in a hand to the winner of the pot, with other players seated at the table receiving nothing – irrespective of whether they contributed to the rake deducted from pot or not.

For example – Three players see showdown in a pot worth $20.00, from which $1.00 is deducted in rake and 10 VIP Points awarded. Whereas under the most commonly-used “contributed rake” points allocation system each of the three players would receive 3.33 VIP Points; by using the WTA system, the winner collects all 10 VIP Points.

The system is considered by some to be the fairest points-for-rake system, as the winner of the pot has already lost $1.00 in rake despite winning the hand.

One Reply to “Ultimate Poker – “Nits Need Not Apply””