The startup problems experienced by Ultimate Poker following its launch have been remedied, but hurrying to be first online may eventually hurt the site. 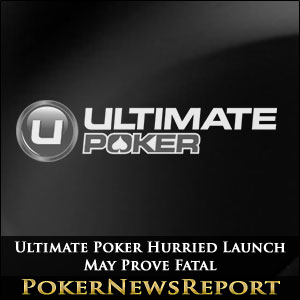 The startup problems experienced by Ultimate Poker following its launch have been remedied, but hurrying to be first online may eventually hurt the site.

Player traffic numbers have improved since the April 30 roll out, with almost 200 cash game players now found regularly seated on the virtual felt. Much of the improvement is due to correcting the geolocation problems that had previously shut out Verizon cell phone customers who could not log on.

With that issue resolved, as well as severing its connection with Iovation, the player verification company that was previously affiliated with UltimateBet, things are now seemingly running smoothly. However, players may not forget the difficulties encountered upon the Ultimate Poker launch and may jump ship to other poker sites once those sites are up and running.

One of those sites will be WSOP.com, the Caesars Entertainment online offering. While at least one poker media outlet published a newsbite stating that WSOP.com might launch as early as today, that rumor turned out to be erroneous. However, Caesars’ honchos have stated that they hope to be accepting real-money wagers sometime during the 44th annual WSOP at the Rio, which kicks off on May 29.

A roll out during the WSOP live events makes perfect sense and would be a marketing executive’s dream. Combining their Internet product with live poker play would allow for a number of online satellites to be offered in which the winners would move on to compete in live events. And with the WSOP brand well-known throughout the poker community, it isn’t too much of a stretch to think that a number of Ultimate Poker players will change their allegiance and continue their online play at WSOP.com.

Considering also that a number of those Ultimate Poker players had a somewhat bad experience with the site’s launch that was done hurriedly in an effort to be first in line in order to establish a customer base, WSOP is making sure that all the bugs are worked out before allowing players to play with real money.

One such bug was revealed when two of the same cards appeared on the flop at an Ultimate Poker table. It led one WSOP executive to remark that online players in Nevada deserve a first-class product and that WSOP won’t officially launch until they are certain that only one nine of spades is available in the virtual deck.

To be fair to Ultimate Poker, they are in the midst of a 30-day trial period. Also, being first in almost any new product launch means that certain glitches are bound to appear. But in this particular case, rolling out their site before it was seemingly ready for primetime may come back to haunt Ultimate Poker once the competition arrives.