Ultimate Poker has been tirelessly working on fixing several issues that have plagued the site since launching in Nevada on April 30. 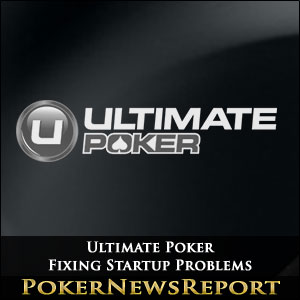 Ultimate Poker has been tirelessly working on fixing several issues that have plagued the site since launching in Nevada on April 30.

The first legal online poker site to debut in the U.S. has been applauded by many Nevada residents and tourists who are ecstatic at the ability to play Internet poker at a regulated site. But many Nevadans who experienced difficulties logging on have been clamoring for Ultimate Poker to correct the problems that have been preventing them from playing online poker.

The largest of those problems has been rectified as Ultimate Poker has announced that players using Verizon, Virgin Mobile and Cricket cell phones can now be verified. Subscribers under those cellular phone plans had been shut out from playing for the first two weeks of operation due to geolocation issues.

The stringent requirements of Nevada’s online poker scheme calls for the location of players to be verified through their cell phones and IP addresses. Verizon, Virgin and Cricket had not been compatible for verification. But that snafu has been rectified, which should increase player traffic at the site considerably. Verizon is the U.S. leader in cell phone customers.

AT&T and T-Mobile users reportedly had no such verification issues, which has allowed UltimatePoker.com to achieve a worldwide ranking of 38th place among online poker rooms and networks. Although that ranking may not seem impressive, it actually is considering that a large portion of Nevada residents who wanted to log on and play could not.

Ultimate Poker already has outpaced poker rooms such as the U.S.-friendly SealsWithClubs and PartyPoker’s offering in Spain. And with Verizon cell phone customers now able to join the fun, player traffic at Ultimate Poker is expected to spike further upward.

Another problem currently being looked into is that players who live near Nevada’s borders are also falling victim to geolocation verification issues. Apparently, some of those players’ cell phones ping off towers outside of Nevada, which incorrectly shows them to be out of state. The company’s IT team is hard at work on rectifying that dilemma.

Other than verification matters, some players have been complaining about the software. The inability to resize tables and to automatically post blinds in order to multi-table successfully has frustrated many grinders. Common complaints center around the fact that Ultimate Poker rushed to get its product out first, sacrificing quality in the process.

It should be noted that Ultimate Poker’s real-money launch is still considered to be in the testing phase. The Nevada Gaming Control Board is monitoring the situation and it is believed that the problems associated with being first will all be rectified in due course. So players can expect the site to continually improve their offering as time goes by.