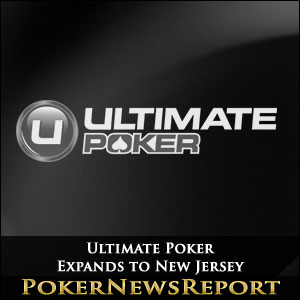 Currently the only regulated site operating in the U.S. since its April 30 launch in Nevada, Ultimate Poker is run by Station Casinos. Without a brick and mortar casino among the 12 found on the Atlantic City boardwalk, Ultimate Poker’s deal with the Trump Taj Mahal allows it to expand its reach to include New Jersey.

There currently is no interstate compact agreement between the two states that would allow Ultimate Poker players from both jurisdictions to compete on the same virtual tables. However, such a deal will likely take place at some point in the future. Nevada Governor Brian Sandoval approved interstate compacts in February and industry experts believe that its only a matter of time before New Jersey follows suit.

Ultimate Poker operates under the Ultimate Gaming name, which also promotes the mixed martial arts competition known as the Ultimate Fighting Championship. The UFC is quite popular among the younger generation, as is online poker ever since Internet play boomed about ten years ago.

Ultimate Gaming Chairman Tom Breitling said that the deal will further the company’s goal of providing more and more Americans with the opportunity to play regulated online poker.

All 12 New Jersey casinos have applied for online gaming licenses. To keep on schedule for the late November launch, those casinos were required to name their partnership agreements with third-party providers by June 30. In addition to Ultimate Gaming and Trump Taj Mahal, partnerships among other casinos and gaming providers include Golden Nugget and Bally Technologies, Borgata with bwin.party, and Caesars Entertainment’s four properties alligning forces with 888 Holdings.

The next date that New Jersey applicants must adhere to is July 29, when completed applications for Internet licensing must be filed. Casinos and their partners who fail to meet the deadlines imposed by state gaming regulators will miss the Nov. 26 launch date. Those who are tardy meeting requirements can launch after the target date, but doing so runs the risk of falling behind the competition in establishing a customer base. A handful of Atlantic City casinos have yet to name their partners.

One of those casinos is the Atlantic Club, who is still embroiled in legal proceedings with PokerStars after terminating a purchase agreement that was brokered in December. PokerStars is still trying to acquire the struggling casino, but the most recent judge’s ruling in the matter dealt a blow to PokerStars’ attempt to enter the online poker market via ownership of a land-based New Jersey casino.