Perhaps in an effort to stave off the competition of WSOP.com in a few weeks, Ultimate Poker has signed new pros and added more money to its Sunday Tournament. 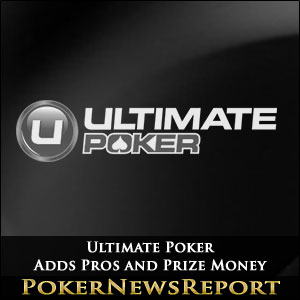 Perhaps in an effort to stave off the competition of WSOP.com in a few weeks, Ultimate Poker has signed new pros and added more money to its Sunday Tournament.

Jason Somerville, Will Reynolds, Lauren Kling and Jonathon Little all took to Twitter to announce sponsorship deals with America’s first legal online poker site. The four join Antonio Esfandiari and Terrence Chan as ambassadors at Ultimate Poker and will proudly wear the site’s patch during the WSOP currently underway at the Rio in Las Vegas.

WSOP.com recently launched a play-money offering in the Silver State and is expected to accept real-money wagers sometime this summer. Ultimate Poker’s customer database is likely to be challenged by the arrival of the popular WSOP brand. Signing several more pros before WSOP.com’s real-money roll out may help the site retain its first-to-market advantage.

Kling has cashed in 10 WSOP tourneys and her career earnings on the live circuit are fast approaching a quarter-million dollars. She is also an accomplished online player, racking up hundreds of thousands of dollars in wins on the virtual felt. Little has earned more than $4.9 million in live tournament action. More than 20% of that total is attributable to his first place finish at the WPT World Poker Finals in 2008.

Another way to establish a loyal following is to kick in more prize money to tournaments. Ultimate Poker did that yesterday by adding $5,000 to its guaranteed $10,000 Sunday tournament. Shrewd poker players always look for opportunities to gain value. And with thousands of players in town for the WSOP, the added prize pool cash was a can’t miss affair for many.