In a breach of security at Ultimate Bet, information from every player’s account had been publicly posted on the internet, revealing personal information of approximately 3.5 million poker players holding accounts at the nearly-dead poker site. 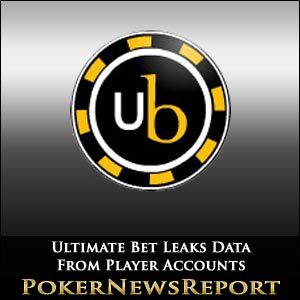 In a breach of security at Ultimate Bet, information from every player’s account had been publicly posted on the internet, revealing personal information of approximately 3.5 million poker players holding accounts at the nearly-dead poker site.

A popular poker forum website posted a link to the account information via an anonymous posting, but removed the link roughly eight minutes later. In that short span of time, enough people identified the link and apparently passed the information around privately.

The data listed was organized by specific countries, with about 2 million accounts from the U.S., 319,000 Canadian accounts, 137,000 United Kingdom accounts, and approximately 1 million accounts from all other countries combined. The data contained more than a dozen other columns which were not clearly identifiable. The unidentifiable columns were not labeled and contained inconsistent information. For example, one column that listed IP addresses also contained physical addresses and another column listing screen names for some users contained account numbers for different users.

Financial information of each player, excluding account balances and deposit methods, was not listed. And no personal credit card numbers were shown either. It is not known who leaked the account information or the reason why.

Ultimate Bet and Absolute Poker, who together make up the Cereus Network and were the third largest internet poker network prior to Black Friday, have been virtually defunct since the U.S. Department of Justice’s actions that seized their domains and much of their assets and indicted the company’s principals in mid-April. Since that time, most of the poker room’s players haven’t been able to cashout, while some overseas non-U.S. players have been able to withdraw small amounts sporadically. In mid-June, it was reported that both poker sites combined had only approximately ten percent of the funds owed to players, said to be $54 million. Toward the end of October, the Kahnawake Gaming Commission, who issued the operator’s license to the Cereus Network, announced that company owners were planning to liquidate assets to reimburse players with money in their account balances at the sites. However, the company’s full assets are not known.

The data leaked on the internet was exclusive to Ultimate Bet players and did not include Absolute Poker players. Ultimate Bet players with valid accounts on the site should be vigilant in realizing that personal account information may have gotten into the wrong hands and to be wary of suspicious phone calls or emails received. Account holders would also do well to ensure that their online passwords to email addresses and other login information to various accounts is sufficiently secure to ward off any possibilities of identity theft or fraudulent activity.

Various players at the Cereus Network have reported the inability to join real money sit-n-go tables the last two days. It is possible to log onto the network, but attempting to join a sit-n-go table results in nothing happening. There are a couple players listed as sitting at sit-n-go tables waiting for more players, but these are believed to be props. At the time of this writing, there was only one real money table in action, a $.01/.02 no-limit hold’em table with an average pot of $.44. At the lone table, 57% of players were seeing the flop and 120 hands were being played per hour. However, play money tables are quite populated and going strong.