A documentary film based on the Super User Scandal in which players were cheated out of millions of dollars at UltimateBet in the mid-2000’s is in the making. 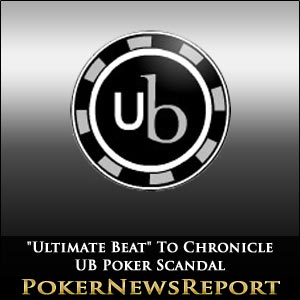 A documentary film based on the Super User Scandal in which players were cheated out of millions of dollars at UltimateBet in the mid-2000’s is in the making.

Scott Bell, a film maker who is also a major contributor to public online poker forums under the name ElevenGrover, has been conducting research and writing about the cheating scandal for quite some time. Bell told QuadJacks that he is planning to release the documentary on DVD and video-on-demand sometime in late fall or perhaps early winter.

In 2008, UltimateBet released a statement admitting that company insiders were found to be cheating by using computer software that allowed hole cards of players to be displayed. The company insisted it had removed the unauthorized software in February of 2008 and issued refunds to various players who were affected by the cheating. Later that year, UB’s licensing body, the Kahnawake Gaming Commission (KGC), came to the conclusion that Russ Hamilton, a UB consultant and professional player who won the WSOP Main Event in 1994, was the main perpetrator of the scheme. The original amount that players were cheated out of was said to be $6.1 million dollars, but in 2009, the KGC increased the amount to in excess of $22 million.

Bell’s idea for the film came about when he began compiling blog posts about the UB scandal and realized that it would be hard for readers to go through all the information in written text and it would be more beneficial to put his findings on film. ‘Ultimate Beat” will detail how UB executives tried to cover their tracks following the scandal and how many players were left without compensation for their money lost to cheating. It is widely believed that several major players in the scam got away scot-free without ever being named or revealed.

The site went to extraordinary lengths to cover its tracks, Bell said. Although the collective investigation that took place in 2008-2009 was really amazing, what was presented as what had happened, didn’t really happen. What really happened is that the company payed a lot less back than they reported, they made up a lot of silly stories as to why they couldn’t provide an audit trail or hand histories, and the people involved at the height of the cheating have never answered the first questions.

UltimateBet and Absolute Poker together made up the CEREUS Network, which was named in the Black Friday indictments along with Full Tilt Poker and PokerStars. AP and UB players, together with those who played on Full Tilt, are still waiting for reimbursement of their account balances that have been virtually frozen for well over one year.