Alan Gold settled the conclusion of the €1 million UKIPT Galway Main Event in less than 4 hours to collect €187,494 and a Full Tilt Poker sponsorship package. 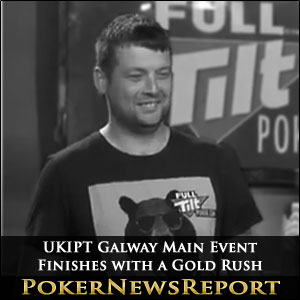 Alan Gold settled the conclusion of the €1 million UKIPT Galway Main Event in less than 4 hours to collect €187,494 and a Full Tilt Poker sponsorship package.

All of the events at the Galway Poker Festival have been played at a frantic pace, and yesterday´s conclusion to the UKIPT Main Event was no different. Eight players returned for the conclusion of the event, with three still in with a chance of winning a Full Tilt Poker UKIPT sponsorship package for being the last qualifier remaining in the tournament – Alan Gold, Dara Davey and Damian Porebski.

With the game about to enter Level 26 (blinds 25,000/50,000 – ante 5,000) none of the players were in immediate danger of elimination and, with Dara Davey having been drawn to the left of chip leader Alan Gold, home fans were hoping for another Irish victory at the Festival.

Alan Gold set his stall out in the first hand of the day that saw a flop – bluffing Dara Davey out of more than one million chips, and from there the carnage started. Jonathan Slater was unlucky to be eliminated in eighth – calling Dimitri Pembroke´s shove with pocket Sevens on a flop of Q♠ 10♥ 7♦ and discovering that Pembroke had been dealt pocket Queens – but Christy Morkan´s shove with A♠ 9♠ could best be described as ill-timed, as he ran straight into the A♣ 10♦ of Paul Febers.

Benjamin Spragg briefly enjoyed a workable stack after being fortunate to double up with A♣ J♥ against Alan Gold´s A♠ Q♦ – but Gold got his revenge with interest to cripple Spragg (5♠ 4♠ for two pairs > A♠ K♣} for top pair top kicker), and Benjamin Spragg was the third player to be sent to the rail within the first hour when shoving the remnants of his stack with A♥ 6♣ into the A♠ 9♣ of Dara Davey.

Level 26 belonged to Paul Febers, who twice got pre-flop 5-bet shoves through against Alan Gold and Dimitri Pembroke to chip up to within 300,000 chips of Alan Gold, but while Febers´ chip stack was in the ascendency, Damian Porebski´s was headed in the opposite direction and he eventually was forced to shove the last of his chips with A♦ 10♠. Alan Gold made the call with A♣ J♦ and – after seeing a Nine-high board – Porebski left to join the rail in fifth place.

Dimitri Pembroke was also unfortunate to bust from the UKIPT Galway Main Event, choosing the right minute to get the last of his cards in with A♦ K♦ against Alan Gold´s A♣ 10♦. Unfortunately the board ran Ten-high to pair Gold´s hand, bust Pembroke from the event and send Gold back into a massive chip advantage – one which was significantly enhanced ten minutes later when Gold eliminated Dara Davey 10♦ 10♥ > K♠ J♣.

Having taken a 12 million -v- 4.75 million chip advantage into the heads-up against Paul Febers, Alan Gold was unstoppable. He reduced Febers´ stack to less than 3.5 million chips with aggressive play in the first two hands of the heads-up, and on hand three it was all over:-

Paul Febers opened up to 160,000 chip and Gold called to see the Q♦ 6♥ 5♠ flop. Febers was again the aggressor post-flop after Gold had checked, but his 160,000 continuation bet was raised to 450,000 chips. Febers made the call and both players saw the Q♣ dealt on the turn.

Gold placed 775,000 chips onto the table – which Febers called – but after the river card K♦, Alan Gold moved all-in. Paul Febers hesitated before making the call, and rolled over 9♥ 9♣ for two pairs. Gold turned over Q♥ J♦ for trip Queens and had won the UKIPT Galway Main Event.

A deal prior to the heads-up conclusion of the UKIPT Main Event saw Paul Febers tie up a little more than was originally available for second place, but with Alan Gold already having won Full Tilt Poker´s sponsorship package for the remaining UKIPT Main Events this season, he was probably feeling a little charitable. We will see Gold at the next stop of the UKIPT Tour, which will be in London from October 2nd – October 6th.