The eight-handed final table of the £500,000 UKIPT Edinburgh Main Event gets underway today, with Jason Beazley and Liv Boeree at the top of the leaderboard. 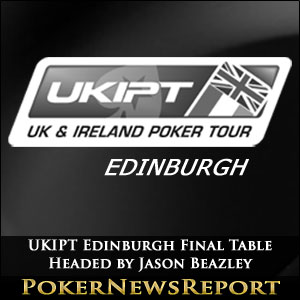 The eight-handed final table of the £500,000 UKIPT Edinburgh Main Event gets underway today, with Jason Beazley and Liv Boeree at the top of the leaderboard.

It was a pretty tumultuous day at the Assembly Rooms in Edinburgh yesterday, as thirty-six players returned for the penultimate day of the UKIPT Edinburgh Main Event. The mixture of well-known poker stars, tournament circuit regulars and online qualifiers made for an exciting day´s poker, but at the start of play it would have been difficult to predict who the final eight were likely to be.

At the head of affairs when play begun was Jonathan Lundy, who had three times the average chip stack after knocking out long-time chip leader Patrick Weifels on Saturday night A♠ K♥ > A♣ K♦ on a four-spade board; but he took a major knock to his chip stack during the second level of the day when Chris Gordon won a massive pot straight > straight, and relinquished the chip lead to Daniel Charlton, who had bust Frederico Silva 2♣ 2♠ > K♥ J♣ and Ondrej Drozd 5♣ 3♣ > Q♦ 10♠ in a sensational start to his day.

One Star Down – Another One Up

Two PokerStars-sponsored professionals remained in the thirty-six player field at the beginning of Day 3 – Mickey Petersen and Liv Boeree – and both enjoyed differing fortunes. Petersen was particularly unlucky to be crippled by Jacobus Visser A♦ Q♦ > A♣ Q♥ on a three-diamond board, and he lost his last handful of chips soon after.

However, Liv Boeree had an exceptional day, and goes into the final table second in chips after doubling up early against Sindre Haugen A♠ 8♠ > K♠ 7♠ and then doubling up twice more during Level 23 – K♦ 10♥ > Jacobus Visser´s Q♥ 9♦ and then with a lucky K♦ on the River against Ciaran Heaney K♥ Q♣ > Q♠ Q♥. She completed the level by turning a straight with 5♣ 4♠ to take a stack of chips from Dean Hutchinson – who himself was enjoying a good day after knocking out Daniel Charlton A♦ A♠ > J♥ J♠.

Beazley Takes the Chip Lead at the Death

Jason Beazley had entered the penultimate day of the UKIPT Edinburgh Main Event in a fairly strong position and, drawn on a table with shorter-stacked players, managed to increase his chip stack with plenty of post-flop aggression. His aggression continued when he encountered bigger stacked players, and he forced Chris Gordon to lay down two pairs on a board of 10♣ K♣ J♦ to scoop a pot worth more than 1 million chips before busting Ben Glanton in tenth place K♣ K♠ > A♥ K♥.

Beazley moved into the chip lead in the last hand of the night, when he called a shove from Jonathan Lundy (A♠ K♠) with a pocket pair of Jacks. The Jacks held as the board ran 10♦ 9♦ 7♥ / 4♠ / 7♣ to eliminate the chip leader coming into the day in ninth place, and set the UKIPT Edinburgh final table.

Looking Ahead to the UKIPT Edinburgh Final Table