After an incredible weekend´s play at the PokerStars sponsored UKIPT in Dublin, Jason Tompkins leads the final table going into the climax of the Main Event. 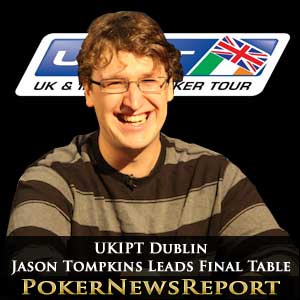 After an incredible weekend´s play at the PokerStars sponsored UKIPT in Dublin, Jason Tompkins leads the final table going into the climax of the Main Event.

Sunday was one of the most eventful day´s poker in UKIPT history, as all of the top five chip leaders from Saturday´s Day 2 were all eliminated, while last year´s winner – Max Silver – recovered from a terrible Day 2 to still be in contention at the final table.

A Rich UKIPT History Among the Finalists

Max is not the only previous UKIPT winner to be hunting for a second title, as Joeri Zandvliet – who won in Manchester in 2010 – holds a strong position in third, and among the remaining 6 players Jason Tompkins already has three UKIPT cashes to his name, Charles Fabian has one and David Doherty finished fourth in the Nottingham UKIPT High Rollers event.

How the Weekend Unfolded

205 players took their seats on Saturday afternoon (Day 2), with those who survived until there were just 90 left certain of a cash. Plan A was to play down to 54 players, which the tournament director estimated would take 7 hour-long levels. 6 hours and 40 minutes later we were there. Recovery of the day was achieved by Max Silver who, from an overnight chip stack of 196,600, ducked down to 12,000 before chipping back up to finish Saturday on 113,500 – and then completing his recovery on Sunday to go into the final table with 600,000 chips.

Queen on River Sets Up Tompkins

Final table chip leader, Jason Tompkins, owes his position to victory in the first million chip pot played in the tournament. Calling Day 2 chip leader Emmet Mullin´s (A♥ K♣) 6-bet shove with Q♠ Q♦, Tompkins looked in trouble when the flop fell A♦ 6♥ 5♣, and things looked worse for the lad from County Kildare as the 8♠ on the turn kept Mullin in the lead. However, the river Q♥ enabled Jason Tompkins to take the pot, the tournament lead and cripple one of his most experienced competitors.

With the field reduced to just two tables, Jason Tompkins used his large chip stack to bully other players out of hands. Daniel Henderson and Rory Curtis were both forced to lay down hands in valuable pots and, when Tompkins was called, he seemed to have the cards every time. He got his stack over two million by eliminating Damian Porebski ({A♠ J♣) in twelfth, when Tompkins’ 9♠ 9♦ found the 9♣ on the flop, and by sending Dominick Hever (Q♥ 10♦) to the rail when his 8♦ and 4♦ both paired with the board.

Noel O’Brian and Joeri Zandvliet are Right Behind

Noel O´Brian did not waste the chips won from David Doherty earlier in the day. He used them to take out Day 2 third-placed Rhys Jones in fifteenth, when his 5♣ 5♠ caught the 5♦ on the turn to bust Jones´ flopped Aces, and got right into contention when eliminating Michael White in ninth – his A♠ J♠ completing the flush and dominating White´s flopped two pair. Joeri Zandvliet´s rise into the top three was largely thanks to victory in a 1,400,000 chip pot when Zandvliet´s A♣ A♦ held on against Jason Barton´s A♠ K♣.

Doherty Bounces Back Up …

Scottish poker player David Doherty also showed that when he falls he can bounce right back. Doherty, who had been enjoying a good run on Saturday, was stopped in his tracks early on Sunday when shoving all-in with A♦ K♣ against Noel O’Brian´s A♠ 8♠. The 8♦ on the flop reduced his stack to less than 150,000 (blinds 5,000/10,000) but Doherty regained his composure (and, for a while, the chip lead) when eliminating Mark Muldoon in a A♣ Q♦ v A♠ J♠ race and, soon after, Colin Hammond in a K♠ 10♠ v J♣ 10♣ race where neither player managed to connect with the board.

… And Csire Laughs at Adversity

Hungarian poker player, Robert Csire, also made an astonishing comeback. Crippled down to less than three big blinds during Max Silver´s ascendency, Csire adopted a push or fold strategy which worked twice in succession prior to eliminating Jason Barton when coming from behind with K♠ Q♣ to dominate Barton´s A♣ 10♣. Csire doubled up again through Joeri Zandvliet before eliminating Daniel Henderson in tenth when an ace on the flop paired with his A♣ 3♥. By the close of play the Hungarian had remodelled his chip stack from 27,000 to 1,145,000 in little more than a level.

Irish eyes will be smiling if one of the two chip leaders progresses to the UKIPT Dublin title later today, but both Tompkins and O´Brian face a tough challenge from Joeri Zandvliet and the USA´s Charles Fabian. Of course, you will never be able to write-off any of the comeback kings, and whichever player emerges as victorious from this final table will have earned the €83,500 first prize.