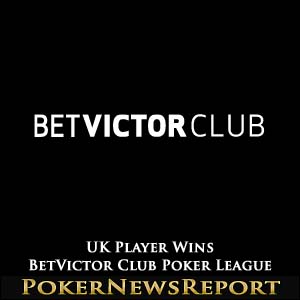 The competition sparked major interest among players, who gathered online from the four corners of the earth to pit their skills in the first league launched by online poker room, BetVictor. Over 500 players took advantage of BetVictor Club’s offer of a free play league with over €10,000 in prize money handed out by the site.  Players were invited to enter the league and earn points throughout the month, with the winner pocketing the top prize.

The BetVictor Poker Club League for November attracted a mixture of players from around the world, from a total of 47 different countries, making for some interesting demographics.  20% of the field was dominated by players from Israel, although only one player from this country managed to make the top twenty list.   The UK also dominated around 20% of the league and managed to push only one of its men, alias111 into the top ten, and finally to the very top of the board.

A host at the BetVictor Club, Mark Napolitano gave his views on the demographics of the competition. In a League that started out being heavily dominated by Bulgarians, in the end they just failed to close the deal, he said, eventually finishing with a still impressive 4 top 20 finishers even though they only had about 6% of the total entries. Top Bulgarian was gladius1 who finished as runner up.

Romania also ended the month with 4 top 20 finishers after taking 3rd and 4th spots in the inaugural League, added Napolitano. Romania had around 15% of the starting field.

According to BetVictor, the top ten finishers were split by less than 50 points, proving what a tough competition it was.  Napolitano said that right up until the end, every one of the top ten had a good chance of taking the top spot and winning the €1,500.  Gladius1 from Bulgaria earned himself €1,000 for his second-place win, with prizes in descending value awarded to the top ten players.

The December BetVictor Club Poker League kicks off this week.